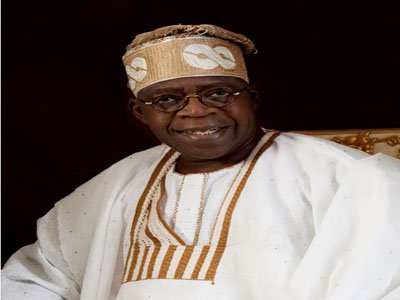 Imo State Governor Rochas Okorocha claimed that Tinubu said governors have no role in the choice of a presidential candidate for the party.

This is not true, the former Lagos State governor said, adding that what he said in that encounter with journalists in Akure “and still canvasses is that the APC should not mimic the PDP’s penchant for short-circuiting internal democracy by promoting the idea of an automatic ticket”.

Okorocha had said all the APC Governors had endorsed President Buhari for re-election, thus implying that the governors had given the President an automatic ticket for 2019.

Asked to respond to the issue after a meeting with Afenifere leader Pa Fasoranti in Akure, Tinubu said such was strange to the party and that President Buhari is a man who believes in due process.

Okorocha, however, interpreted that to mean a slight on the party’s governors.

Speaking with journalists in Akure after receiving an honourary doctorate degree at the Adekunle Ajasin University, Akungba-Akoko, Ondo State on Saturday, he said his statement referred to the party’s governors and that Tinubu was crying more than the bereaved.

In a statement last night in Lagos, Tinubu’s Media Adviser, Mr. Tunde Rahman, said: “We note Imo State Governor Rochas Okorocha’s statement. It is important that the record of what Asiwaju Tinubu said when approached by journalists during his last visit to Akure is accurate. Thus, I make this statement in the hope of clarifying a misinterpretation that seems to have taken hold in some quarters.

“I was at the interview session. Asiwaju never said anything that could be interpreted as meaning or even implying the governors are irrelevant or insignificant to the party’s nomination process. As a former governor and a leading statesman within the party, such words would never come from him.

“Moreover, Asiwaju is a democrat who believes that the open and democratic processes of the APC, which led to the nomination of President Buhari in the first instance, have served the party well and has helped distinguish APC from PDP and other parties where fairness and internal democracy are rare commodities.

“Every individual has a right to endorse or support a candidate of his choosing. What Asiwaju said at that encounter and still canvasses is that the APC should not mimic the PDP’s penchant for short-circuiting internal democracy by promoting the idea of an automatic ticket. The exercise of internal democracy and honoring the letter and spirit of party rules can only strengthen the party and enthuse its members.

“APC’s all-inclusive philosophy was not devised today. It had been with the party since its creation. It was this spirit, which we believe, attracted fellow progressives and those who genuinely believe in democracy in all of its aspects to the party. Asiwaju includes Governor Okorocha in this group.

“The APC Governors are essential and important voices in the party. Asiwaju values and respects each one of them and gives their individual and collective opinions much weight. Yet, in the exercise of our opinions and support for candidates, we all must be guided and never lose clear sight to the democratic ideals that separate the APC from the other parties. We must maintain the integrity of the processes no matter how clear-cut a decision or an outcome may seem to be. With regard to democracy, the process is of equal import as the outcome itself.

“This is the essence of what Asiwaju said that day in Akure. He merely asked APC members to adhere to the democratic path that thus far has served the party so well. There can be no true dispute with such a sentiment.”