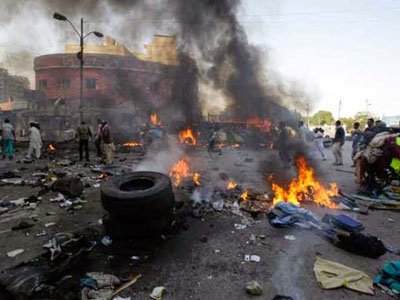 Mr. Chukwu during a briefing on Monday, said, the female suicide bombers both tried to cross over deep trenches made to prevent them while they were entering the city early morning at the time worshippers were going out for early morning prayers.

“One of them crossed over, however, in the process of crossing the barricade, the other one was sighted by security operatives and was brought down. But the one who had already crossed over, on seeing that her colleague was gunned down ran into a nearby mosque where she detonated her explosive, killing herself and other 8 worshippers with many other injured. The number of injured are 18.”

He said there are other two killed earlier, putting the number of deaths to 12. He said those injured were being attended to at the University of Maiduguri Teaching Hospital.

Related Topics:Borno suicide attack
Up Next