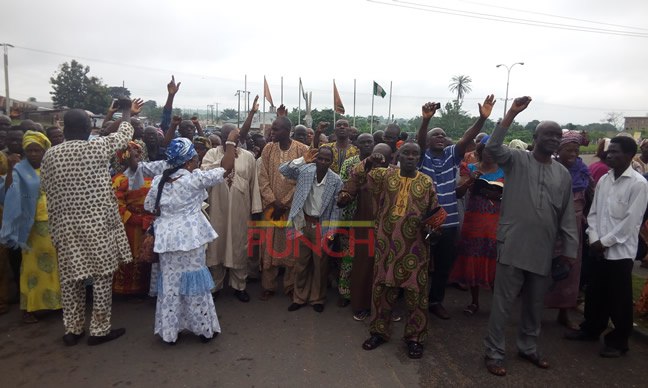 Osun state pensioners at a protest. Photo source: The Punch

Osun state retirees on Tuesday have embarked on a protest prompted by economic hardship due to unpaid retirement benefits.

The senior citizens, who had stormed Osun State Government Secretariat in protest, said people were no longer willing to lend them money to feed over their inability to pay back the previous borrowing.

The protesters, who were mostly primary school teachers, locked the main entrance to the secretariat and refused all entreaties to open the gate, insisting on meeting the governor, Adegboyega Oyetola.

Stating their grievances, the leader of the protesters, Michael Adebayo, said hunger made them to embark on the protest, adding that no one was sponsoring them.

Adebayo also said many retirees that left service since year 2016 on a contributory pension scheme had not been paid their entitlements and demanded that Governor Oyetola should address them.

He said, “Hunger forced us to the street to embark on protest. We have people in Ibadan, Lagos, and many places who have been helping us, but they always heard the news that the state government release money for us. Because of that, they are no longer willing to help us. Also, because we could not pay back the previous money many people lent us, they are no longer willing to lend us money to feed.

“You claimed that the present administration is battling with the backlog of pension. Anybody that gets to the seat of government will inherit both assets and liability. That an administration left backlog should not be part of what you should tell us.

“The person that incurred the debt is from your party. Since you know that there was mismanagement of government resources, you should have notified EFCC to arrest the person.”

Speaking earlier, Osun state deputy governor, Benedict Alabi, urged the pensioners to exercise patience and wait for the outcome of the meeting between them and the state government slated for November 29, where matters affecting them would be discussed.

He said, “I am sure as the deputy governor of this state, the outcome of the meeting will serve your interest as we will add to money we have been allocating on monthly basis to pay of your entitlements.”

Related Topics:Osun pensioners
Up Next