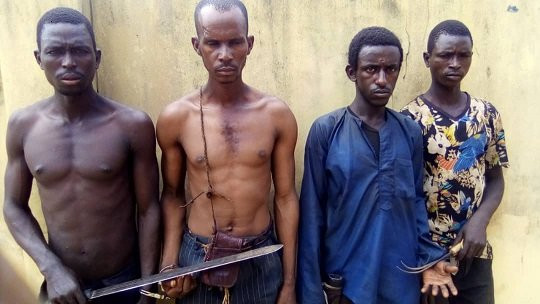 Some members of a robbery gang that invaded Christ Apostolic Church at Gudugbe Alagbon area of Wasimi in Ewekoro Local Government Area of Ogun State, have been arrested by the police.

The suspects who allegedly assaulted worshippers before dispossessing them of their valuables during a vigil, reportedly abducted Mrs. Mojisola Atolagbe, a worshipper before escaping into the forest in the dark.

Ogun police spokesperson, Abimbola Oyeyemi in a statement released on Sunday, November 29, said the incident happened around 1:30 am on Friday, November 27.

The suspects arrested in connection to the attack have been identified as  Abubakar Ibrahim,38, Sulaiman Yusuf, 32, Ismail Yusuf 20, Umar Aliu, 26, and Yinusa Musa.

The abducted woman has been rescued safely by the police who also recovered a cutlass, two cudgels, and assorted charms from the suspects.

Oyeyemi said they would be transferred to the State Criminal Investigation and Intelligence Department for further investigation as directed by the Commissioner of Police, Edward Ajogun. The police have also intensified efforts to arrest the fleeing member of the gang.