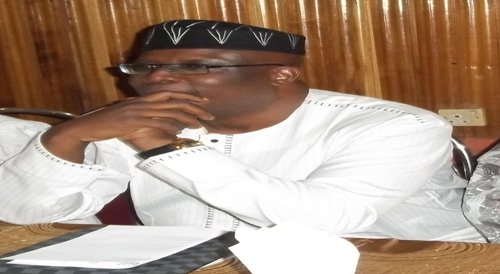 How united is the All Progressives Congress (APC) as it warms up for 2019 elections?

We are determined. If you look at what happened in Kano few weeks ago when the president visited the state, you will know that we are ready for 2019. The president is as popular as ever.

Atiku has left. No other person has followed. We don’t envisage other persons joining him in the PDP. Atiku has the right to take whatever decision he thinks is right as a person.

So, the defection will not affect your party in any way?

We would have loved to have him. In a democracy, the more, the merrier. Many other people will also join us. Many people are leaving the PDP for the APC and many more will come to the APC after its convention.

Is your party not moving at a snail-speed in the course of fulfilling its promises to Nigerians?

We took our time to plan. We took our time to lay a good foundation. And we are executing now. We are making a difference. We came in and we were confronted with recession. We were to bring that recession to an end. There is nothing like snail speed. We think that this time around, we should put some things on ground and what we put on ground should last. That is our concern.

What is the political situation in your state, Ekiti?

The place is agog. Many people are coming out to vie for governor next year. They are realising that Fayose is not good for their health. Some of us are also working to unite members of our party, to see that we can only be victorious when we are united.

If 50 people are struggling for one job, will that not spell doom or disaster for the party?

Who are the four?

I wouldn’t want to mention names. But, I know I am one of the four.

It is being speculated that the national leadership of your party and indeed, President Muhammadu Buhari, have an anointed candidate in Ekiti APC…

Anybody who knows President Muhammadu Buhari will tell you that he is a very fair person. He is not a kind of person who will want to impose somebody. That tells you that it is a big lie from the pit of hell. Even, in matters involving the APC and the PDP, President Buhari has not been partial. He has said that anyone contesting should go out there and canvass, make his viewpoints known; go there and sell yourself and your programmes. The electorate will then decide. Buhari can only support the candidate after he has won the ticket of the party at the primary. If anybody tells you that Buhari is sponsoring him, or he has endorsed him or the national headquarter of the party has endorsed him is lying. I do not believe that. I am in a position to know. I am not a baby in the party. I am in a position to know. The president has not discussed this with anybody. He has not endorsed anybody.

The president is a political animal. Why would you say he will not be interested in an aspirant?

I am telling you this. All of us are members of this party. We are like his own persons. What he wants us to do is: go out there and sell yourself. And let the party members choose the person that is better, or the best as the flag bearer of the party. After that, the president can say, as a party man, as a leader of the party, he will support the candidate that will emerge. Anything other than that is not true.

What has led to that speculation in the first instance?

It is the people who are weak on the ground, people who are not self-confident who are peddling rumours. I do not know why any member of my generation will say that he needs crutches, that he cannot go out there on his own to say that he is capable; and say, I understand the problem of Ekiti people. And then, he markets himself. Now, you are saying you need to be imposed; you need somebody to come and hold you and lead you to the people. It is uncalled for. It is unnecessary. Go there and contest. Anybody that is above 30 years is qualified. So, you want to go and govern a state and you are now lying to the people that the president has endorsed you; that it is the president that is sponsoring you. I think that is unfair to the President of Nigeria.

As we prepare for 2019, is Ekiti that very critical to the APC?

It is very critical because the progressive viewpoints dominate in the Southwest. There was an aberration, which is the PDP controlling a state. The state has to be taken back to the progressives. We are working very hard to take the state back.

The primary will hold around April next year. What are your expectations?

My expectation is that we must conduct ourselves very well. There would ba a level playing ground. We will eshew violence. We will go out vigorously to market our people and let our party members decide who will be the winner. At my age, my engagement, my experience in this country, nobody is sponsoring me. I am sponsoring myself. I am working within a collective of Ekiti people who feel that things are going wrong in Ekiti State and they need to be corrected. I am first among equals. We are going out there to fight. We are going to fight in a decent way.

What are the lessons of the 2014 poll, which your party should learn and the pitfalls that should be averted in next year’s election in Ekiti?

We have conducted a study. We have set up a committee to study why what happened then happened. We are studying the document. We are studying how we can apply ourselves to the act of wining Ekiti. We are communicating with the people, engaging them. We will not look down on them. We will study and find solutions to their problems. Ekiti knows who can stand up to Fayose and drive him out of the place, who can say no, Fayose will not have his way again. We don’t want a surrogate Fayose next year. We want somebody who will plan well, execute well and restore the glory of Ekiti State.

Why is your party not participating in the local government elections?

If you look at the local government elections across the country, it is like chasing after a mirage. The figures are written in governors’ offices. In particular, Fayose is intolerant of the opposition. He is the one appointing candidates for the elections. The electoral officers are his leg men and women. So, why waste your time? We are preparing for next year’s election, which will be conducted by the Independent National Electoral Commission. We are more confident about that, unlike what is conducted by the state electoral commission. For me, although I don’t know what the party will do tomorrow, I think it will be foolish to participate in the local government polls.

If the PDP governorship candidate is coming from Ikere and his running mate is coming from Ado-Ekiti as it is being proposed by Governor Ayodele Fayose, will that affect the calculations and permutations of the APC?

What is your chance at the primary?

It is very bright. We are working very hard. We are not there yet. But, we are going to be there. We have our strategies. We have set up structures. There is no structure now on ground than our own. We are everywhere that we have to be. Nobody comes to us because he wants to chop. All those working with us are committed. We have fanatical supporters because of our agenda. We have a strong agenda. I am the only one who had defeated Fayose in the whole of Ekiti. I led the push for his removal when he was maltreating our people. I am the only one who can stand up to him to say, what you are doing, we are not going to tolerate it. I am the only one who can vchase him out of that state. We are mobilizing efforts in Ekiti, Nigeria and outside Nigeria that will sent him packing in July next year.

Individual aspirants are nurturing their structures. Why are they not collectively building the party?

I can talk about myself. I have been moving around preaching unity; to pacify people. I have been visiting our leaders. A couple of weeks ago, I went to see the Elders’ Forum. I had a passionate discussion with them on the need to bring everybody together. We need to come together to end Fayose’s bad governance. My group does not attack anybody. We are canvassing our position. We are offering our agenda to the people. We are everywhere trying to enlighten people.

Generally, what is your message to Ekiti as the state warms up for the election?

There are few aspirants trying to offend one another. That should stop. One person will represent us in the election coming up next year. And all of us have to queue behind that person. If we make enemies of ourselves now, it will affect our push to get the PDP out. So, I am calling for unity, purposefulness of action, patriotism on the part of members of the APC so that our votes, our energies and strength will not be divided. In unity, we can win that election. If we are united, taking Fayose out will not be difficult for us. So, we must stand up in unity.