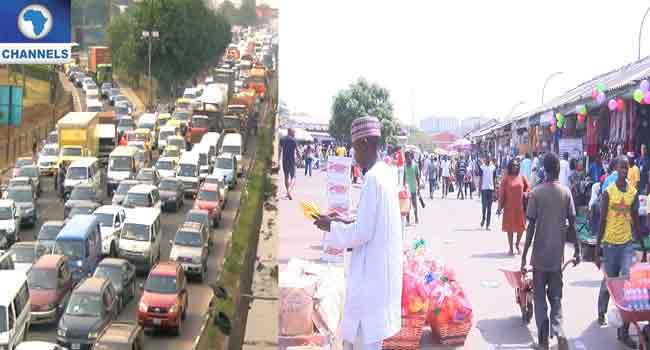 Nigerians have joined Christians around the world in the global celebration of the birth of Christ.

The Christmas celebration is usually colourful and full of activities as it also marks the end of the year celebrations.

Saraki said Nigerians should rededicate themselves to the service of humanity in line with the true teachings of Jesus Christ while Ekweremadu called on Nigerians to emulate the great virtues of humility, love, peace, forgiveness, and reconciliation which he said were the real reasons for the coming of Jesus Christ.

These Christmas messages by Nigerian leaders comes amid the issue of fuel scarcity witnessed across the country, a situation that has led to an increase in the cost of transportation, thereby making it a sour Christmas for some Nigerians.

Various part of the country is encumbered with chaotic traffic scenes with commuters spending hours on the road two days to Christmas Day. The situation is worsened by long queues of vehicles at filling stations in most parts of the state owing to the bitting fuel scarcity.

President Buhari President Buhari in his reaction to the acute fuel scarcity sympathised with Nigerians on having to “endure needless fuel queues.” He assured of NNPC’s intervention, saying he has directed regulators in the oil and gas industry to step up their surveillance and bring an end to hoarding and price inflation of petroleum products by marketers.

Buhari who is also the Minister of Petroleum said the acute fuel shortage is regrettable.

The opposition Peoples’ Democratic Party (PDP) in reaction to the fuel shortage amidst Christmas preparation described this Christmas as “the worst ever.” The party called on Nigerians not to despair but to use the occasion of this year’s Christmas to show love, care and encourage one another despite the biting economic hardship.

The PDP said it is disheartening that Nigerians could not merrily celebrate the yuletide due to the current biting economic hardship worsened by the acute fuel shortage.

Special Adviser to the President on Media and Publicity, Femi Adesina, lightening up Nigerian’s Christmas celebration on Sunday said the media team of President Buhari has released a documentary titled “Buhari: Beyond the Iron and Steel” as a yuletide gift for all.

Reacting to criticism that trail the proposed the documentary, he described critics as malicious adding that fault-finding is the stock-in-trade of such people and that if the critics mistakenly find themselves in heaven, they would even complain against God.

The documentary is aimed at showing the other side of President Buhari and according to Adesina, despite the temporal pains, life must continue, and Nigerians must look at the cheery side, while the government works hard to bring succour.