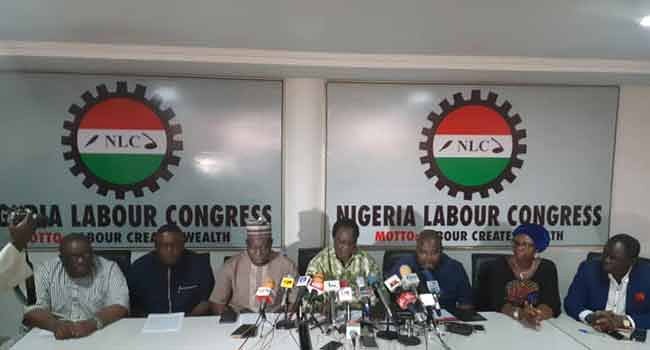 On Thursday, the financial problems facing state governments worsened as many states had yet to start the payment of N30,000 minimum wage 11 months after the deadline given by the Nigeria Labour Congress for the conclusion of negotiations.

State governments’ foot-dragging on the minimum wage negotiations might not be unconnected with their dwindling finances, including federal allocations and internally generated revenue.

Recall that last month reports from the National Bureau of Statistics showed that the states’ total revenues dropped by N180.4bn in the first half of this year compared to what they made in the second half of 2019.

According to the NBS, the IGR and federal allocations to the 36 states and the Federal Capital Territory in the second half of last year amounted to N1.914tn.

But this dropped to N1.121tn in the first half of 2020, indicating a crash of N181bn or 9.45 per cent when compared to the preceding half-year revenue generation of the states.

The total IGR of the states and the FCT in the second half of 2019 was N640.3bn, while their total allocation from the Federation Account Allocation Committee during the same period was N1.274tn, making a cumulative of N1.914tn.

On Thursday, the Kwara State Governor, AbdulRahman AbdulRazaq, in remarks at the virtual World Bank’s Nigeria Development Update with the theme, ‘Rising to the Challenge: Nigeria’s COVID-19 response’, disclosed that only five or six states were fully implementing the N30,000 minimum wage.

He said state governments had to borrow hundreds of millions of naira before they could pay the November salaries of workers in the various local government councils.

AbdulRazaq stated that Kwara recorded a deficit of N200m in the November salaries of local government workers, adding that Kogi borrowed N500m for the same purpose, while Niger was able to pay 70 per cent.

“Funding the civil service takes away basically all our resources and after that, we have nothing left for anything. So, that’s why you see some state governments resorting to taking loans and bonds, and trying to invest in capital infrastructure development,” he stated.

The governor said one of the committees set up by the All Progressives Congress governors to look at reforming the entire Nigerian political and economic systems recommended the abolishment and reform of the local government system.

“But an example is the November salary; there was a shortfall of N200m at the third tier of government after the statutory allocation and the local government revenues are combined.”

The governor added, “Now, if you implement the new minimum wage, we are looking at a shortfall of about N600m per month at that level, and it is not Kwara State alone; it is all over the federation.

“Kogi State had to borrow N500m to pay local government workers’ salaries in November. Niger State paid only 70 per cent. Now, 30 states have signed on to the minimum wage and out of those that have signed, probably five or six are paying it.”

He said many states were not paying the full minimum wage, while some others were paying in percentages, grade levels and so on.

AbdulRazaq said many local governments did not prepare budgets but just take money and spend.

He stated, “In some states, the state governments have taken over the finances of the local governments, which should not be the case.

“In Kwara State, we do not do that. We allow them to spend, but they must make sure that the first line charge, which are salaries and pensions, are paid and after they pay that, there’s nothing left to do.”

The governor admitted that local governments were important because of their proximity to the people, but stressed that there should be a rethink of the structure, particularly on how to fund them.

The Kwara State Government has yet to implement the N30,000 minimum wage for workers in the civil service and local government councils.

The state Chairman of the Nigeria Labour Congress, Issa Ore; and the Chairman, state Joint Negotiating Council, Salihu Sulaiman, told one of our correspondents in Ilorin on Thursday that the labour leaders and the government had yet to sign the minimum wage agreement.

Sulaiman also said, “The minimum wage agreement was about to be signed when COVID-19 broke out, but after the lockdown, the government came with another thing, and when we decided to go on strike, the governor went to the Industrial Court in Akure, and one of the things he asked from the court was whether he has power to negotiate for local government workers in view of the local government autonomy being proposed.

“But, we told him that if he could not negotiate for local government workers, he should pay the state civil service workers.”

In Ekiti State, it was gathered that the COVID-19 pandemic worsened the finances of the state and had delayed the implementation of the minimum wage.

Currently, only workers on grade levels 1 to 6 have been enjoying the minimum wage since October last year.

But Governor Kayode Fayemi, while presenting the 2021 budget to the state House of Assembly, raised hopes that the minimum wage would be paid next year to all workers in the state.

The Chairman, Trade Union Congress in Ekiti State, Sola Adigun, said on Thursday that negotiations between organised labour and the government on the minimum wage and consequential adjustment, which resumed about three weeks ago, would continue today (Friday).

Adigun stated, “We are resuming negotiations tomorrow (Friday). Before the COVID-19 lockdown in March, we were on the verge of putting signatures on paper, but we had a challenge with that of the health sector. We have reached agreements in other sectors.

“Negotiations resumed about three weeks ago. The government and labour representatives will meet on Friday morning.”

In Gombe State, the implementation of the minimum wage, which was suspended following the outbreak of COVID-19 in March, has not resumed.

The state chapter of the NLC said what the state required was the resumption of the new minimum wage payment.

The state Secretary of the NLC, Shuaibu Chiroma, said workers were awaiting the decision of Governor Inuwa Yahaya to resume the payment from January 2021.

“Gombe State had finished negotiations and started payment before the COVID-19 set in. It is no longer about negotiations but restoration. The governor has made pronouncements when he was presenting his budget. He said he would restore the minimum wage by January 2021. We are waiting for him,” Chiroma stated.