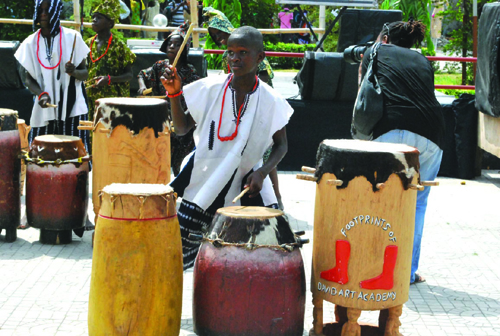 The Korean Cultural Centre says that Nigeria and Korea can use the promotion of their arts and culture, especially drumming, to strengthen bilateral relations between the duo.

Peter Yoon, the Deputy Director of the centre told the News Agency of Nigeria (NAN) in Lagos at the 4th edition of JANGGUN Papa Graduation Ceremony that , “I think that Nigeria and Korea have common areas with arts and culture.’’

The event held at the National Theatre, Iganmu, Lagos was organised by Drumsview Concept.

Yoon added that theatre, an integral part of the entertainment industry, could also be used as a viable medium to bring about change within the Nigerian environment and enhance youths’ ideas.

He enjoined the stakeholders in the entertainment world to use theatre to mobilise youths and children to embrace their different cultures.

“We do not want our present generation to be a wasted one that is why we are partnering Isioma Williams to do this.

“Our youths should focus their minds and intelligence on areas that they know they have strengths to do their own things,” he said.

He commended Isioma Williams of Drumview Concepts for his interest in drumming.

“It is through Williams that we started the partnership two years ago and we are going to tour the country with this drumming,” he said.

Isioma Williams, the founder and CEO of Drumview Concept, in his address said that drumming and drums themselves were unique forms of identity for Africans, both spiritual and physical as they keep “us alive”.

“It is the symbol of who we are; there is no way an African will hear the drumming sounds of his or her root and he or she will not move or feel at peace.

“It is also an art form used by many of our modern musicians like hip-hop and other genres of music, to get unique beats for their music,” he said.

Williams said that if drums were well packaged and handled by the right people as Koreans did theirs, the country could earn foreign exchange from it.

“If we properly structure and institutionalize our drumming culture, starting from the wood carving, skinning, maintenance, selling, usage, exporting and achieving, all these are potential units for employment.’’

He added that many professional drummers were earning their living and maintaining their families from it.

Williams also listed its other advantages: “Drumming is also a special integral part of royalty in Nigeria and Africa.

“Drumming is therapeutic as it is medically used to cure some illness. The drum sound helps to improve people’s mental status.

“We equally reduce crime through it by teaching street urchins and those that are interested in learning it and through it they become useful to themselves,’’ he said.

He added that “Drummers have also become some of the image-makers of the country.

“We travel to Europe and other foreign countries where we try to correct the bad impressions people there have about Nigerians.

“We convince them through our performances and how we relate with them that we are not criminals.

“Drumming sustains our culture and tradition, beautify and create relevance to our heritage dances, as it can invoke war likewise it can create peace.

“A very good old drummer has the tendency of being a great orator too due to the numerous adages, proverbs and poetry embedded in drumming,’’ he said.

He pointed out that the potential in drums and drumming in Nigeria has not been tapped at all.

“I hope someday someone with our interest at heart or the government will realize this and work toward making it great for us,’’ he said.

The only female among the nine drummers that graduated, Ugo Obiayo, a lawyer, said she had been drumming for some time now.

“Drumming is fantastic, marvelous and a good thing to behold, and I will apply it to others in the theatre industry because you can use drumming to complement contemporary music and other things,’’ she said.

Williams started coaching intending drummers since 2013 after attending courses in drumming in Korea and partnering the Korean Embassy in Nigeria.