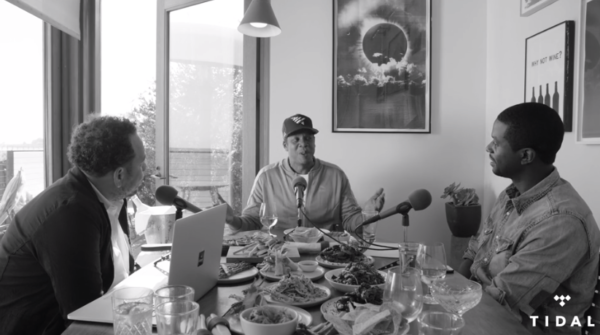 Star rapper and business man, JAY Z sat for a podcast with Rap Radar in what was his first interview since releasing his album “4:44“, and addressed people’s perceptions on certain lyrics in the album.

In his single “Kill Jay Z” off the album, the rapper had said:

I know people backstab you, I feel bad too/ But this ‘f— everybody’ attitude ain’t natural/ But you ain’t the same, this ain’t KumbaYe/ But you got hurt because you did cool by ‘Ye/ You gave him 20 million without blinkin’/ He gave you 20 minutes on stage, f— was he thinkin’?/ ‘F— wrong with everybody?’ is what you sayin’/ But if everybody’s crazy, you’re the one that’s insane.

Fans believed this was a diss to Kanye, who had called him out while on tour, saying they hadn’t spoken in a while.

JAY Z in the interview said: “It’s not even about a Kanye diss. It’s not a diss, I’m talking to myself the whole time.” He continued, saying: “I’m not talking about Kanye when I say, ‘You dropped out of school, you lost your principles,’ I’m talking about me!”

The rapper did go on to say he was hurt by Kanye bringing his wife and child into whatever issues they had. JAY Z said:

You got hurt, because this guy was talking about you on a stage. But what really hurt me, you can’t bring my kid or my wife into it… We’ve gotten past bigger issues, but you brought my family into it, now it’s a problem with me… He knows it’s a problem… He knows that he crossed the line, I know him.

We’ve always had a great relationship… We’ve had one disagreement. Before and after, we’ve been cool. That’s my sister. Not my sister-in-law, no, my sister. Period.

About his line referencing Future in the same “Kill Jay Z” song, where he raps: “I don’t even know what you woulda done, in the Future, other niggas playin’ football with your son,” JAY Z said:

I really don’t mean any malice. I’m not discrediting all step-pops in the world. It was a line to say, that could happen to me in my future. It just so happened that his name was Future, and then I just made a scheme out of it. I wasn’t trying to put Future down. We just made a song together, I don’t have any problems with him.

9ice shows off his adorable daughters