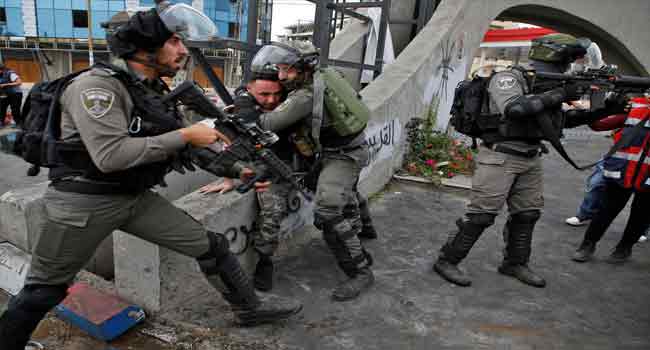 Israel police have arrested three Turkish tourists at a holy site in Jerusalem after an “incident” following Muslim prayers, a police spokesman told AFP on Saturday.

Micky Rosenfeld said the Turks were arrested after being “involved in an incident in Jerusalem’s Old City after Friday prayers on the Temple Mount”, the Jewish term for the Al-Aqsa mosque compound, without proving details.

The three were likely to face an Israeli court later on Saturday, Rosenfeld said.

A video circulating on social media shows a number of men wearing red shirts with the Turkish flag scuffling with police forces in the Old City.

The third man was accused of “disturbing public order and taking part in an illegal demonstration”, according to Anadolu.

US President Donald Trump’s December 6 announcement to recognise Jerusalem as Israel’s capital and move the American embassy there galvanised the Arab and Muslim world.

Eleven Palestinians have since been killed in clashes between protesters and Israeli forces in east Jerusalem, the West Bank and Gaza.

At the forefront of international condemnation of Trump’s announcement, Turkish President Recep Tayyip Erdogan vowed on December 10: “We will not abandon Jerusalem to the mercy of a state that kills children.”