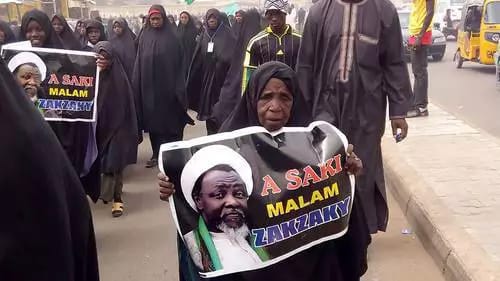 The Islamic Movement of Nigeria at the weekend held a lecture in Abuja to commemorate the two-year anniversary of the massacre of its members in Zaria, during a clash between the Nigerian Army and the Shiite group.

The lecture which had as its keynote speaker, Barrister Haruna Garba Magashi, was tagged, “Application of Fundamental Human Rights: Nigerian Context,” and was attended by members of the movement from Kaduna, Kano, Gombe, Plateau, Nassarawa, Niger and Bauchi states.

Magashi said, that the lecture was organised primarily to discuss the violation of the fundamental human rights of the renowned Shiite leader, Sheikh Ibraheem Zakzaky, who has been in the custody of the federal government since December, 2015. He added that the lecture was a precursor to the protest march that is slated to hold on Wednesday in Abuja.

“Our aim is to enlighten the public on the reality of the truth, so that men of conscience will know what is going on, and decide to take necessary actions because this is a national issue. A Nigerian citizen has been arrested for two years, and all his rights have been violated,” said Magashi.

Also present at the lecture was Dr Lalado Dauda Dangora, a lecturer of the department of Agricultural Engineering at the Bayero University, Kano, whose daughter was shot dead in Kano during the symbolic yearly Arba’in trek of the Shiite group.

Dangora, told newsmen that his daughter, Huseina, a 21 year-old student of Civil Engineering of the Bayero University, Kano, was one of the four persons shot dead by the police during the symbolic trek in Kano, last year. He further alleged that the Kano State governor, Abdullah Umar Ganduje, ordered the killing of members of the Shiite group who were peacefully performing their religious rites.

It would be recalled that Sheikh Ibraheem Zakzaky, was arrested by the Nigerian Army on the 13th of December, 2015, following a clash between members of his Shiite group and the Army at Gyaletsu in Zaria, Kaduna State.

Related Topics:IMNZARIA CLASH
Up Next