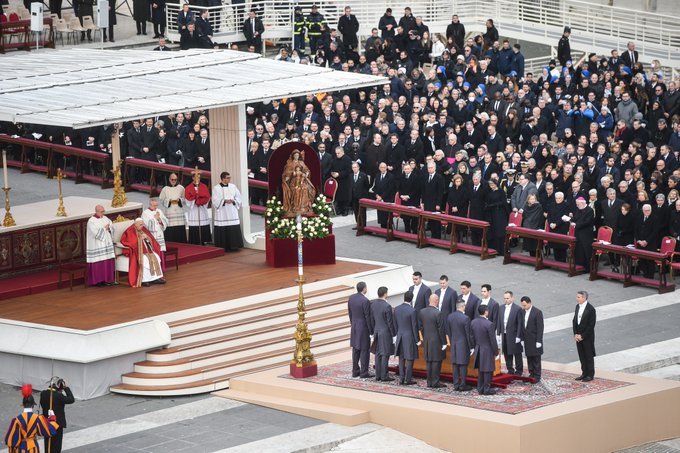 The manner in which Pope Emeritus Benedict XVI will be buried on Thursday has been made public by the Vatican.

According to the Vatican, the casket of the Pope Emeritus was closed on Wednesday in accordance with custom.

Recall that emeritus Pope Benedict XVI passed away on December 31, 2022. He was born Joseph Aloisius Ratzinger on April 16, 1927, in Marktl, Southeast Germany. At 95 years old, he was. He had had a dramatic fall in his health prior to passing away due to advancing age.

“Pope Emeritus Benedict XVI’s coffin was closed in a ritual held Wednesday evening. As per tradition, the Pope Emeritus’ pallia, coins and medals minted during his pontificate, and a ‘rogito’ summarizing the highlights of his papacy, were also placed inside the casket.

“Following the Requiem Mass, Pope Emeritus Benedict XVI’s coffin will be transported through the Basilica and to the Vatican crypt for burial, in the first tomb of John Paul II.

“He will be buried in the traditional triple coffin, with caskets made of cypress wood, zinc, and oak,” part of the statement read.

Young Man Banned From Community After Death Of Brother’s Children