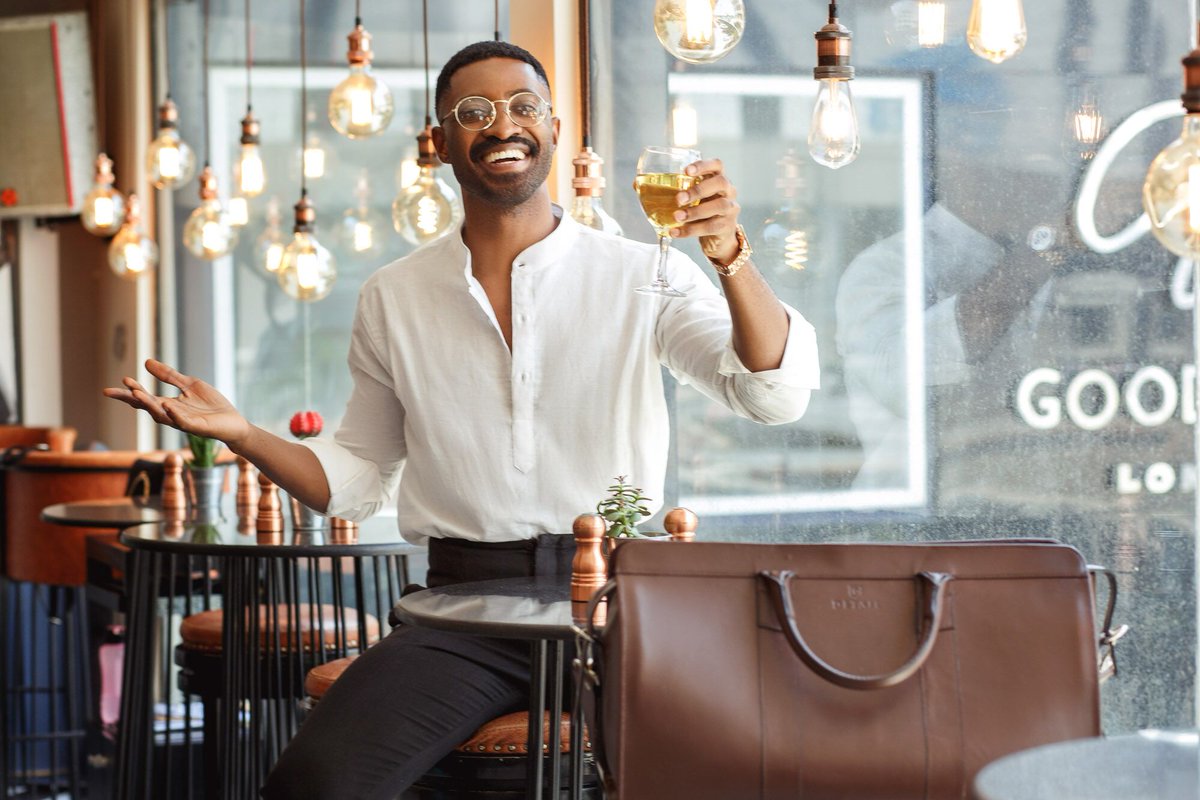 Over the past few days multi-talented Nigerian international singer, Ric Hassani disseminate an array of soul-stirring photos and clips from his just-concluded tour on the exotic island of Mauritius in south-eastern Africa.

The videos which can be found on his Instagram page captures hundreds of fans who reside in the French-speaking nation reciting the lyrics of his songs with an overwhelming degree of vim and excitement.

Real name Eric Ahiauzu, the success story of Ric Hassani is one that gives much credit to the uncommon act of letting one’s heart take the lead. Ric discovered his passion for music at an early age and like many others, began to hone his talent through the platform of his church choir.

By 2007, he was ready for a professional chase but was plagued by the derailing desire to fit in.

On Friday (May 10), Ric Hassani spoke with this writer over a phone call, recounting his exhilarating journey from the days of uncertainty to a praise-worthy reality.

From the mid to late 2000s, hip-hop music was the craze of the listening public. It had become so consequential that it shaped youth culture and dominated the airwaves in Nigeria. Pressured by the reality of that time, Ric abandoned his inherent passion for singing to become a rapper under the moniker, Rico Slim.

“Since I was 7, I had been in choir singing soprano but when

it now came down to being an artiste, in my teenage years, everybody was rapping so I was just like; me singing with a high-pitched voice would make me appear like a b*tch – so I was just like, let me just learn how to rap.

You know you can only keep up a facade for so long. I am a soft guy, my house is full of flowers that’s to tell you what my true personality is. So I decided to drop all the rapping and began to sing. The rap career went well, but I just knew it wasn’t really me.”

A careful evaluation of his background positions Ric as an unlikely entertainer. The artiste was born and raised by scholars hence, it was for his family, imperative that he pursued formal education to a respectable measure. By 2011, Rico Slim was compelled by his Dad to put his rap career on hold for a second degree – a move that later served as a much-needed initial push towards his eventual significance.

His time at the University of Surrey in the UK afforded him a perspective on the world that sparked his evolution. “What really changed me from Rico Slim to Ric Hassani was my Masters (degree) situation. That was my first time ever travelling outside the country. I didn’t want to go, my dad is a professor and my family had to force me. When I went there, the main education for me was just the experience. I met people from different countries like Pakistan, Spain and I just began to see the world through their eyes. It broadened my mind like shit; I can be a lot bigger than being Rico Slim or being one rapper in Lagos. That’s what made me sit and think about my music like who do I want to be?”

That moment of reflection did not only propel him to shelve rapping, it also opened his mind to a new identity. His current moniker Ric Hassani was coined from his first name Eric and a scene from the classic Will Smith- featured series, Fresh Prince of Bel-Air. “There was this scene when one of Will Smith’s long-lost aunty came from Africa and asked him; young boy, what’s your name and he told her William.

So she then told Will that “that’s an English name, the name that your slave masters gave you. I will give you an original African name, from now on, I will call you Hassani because you are handsome” Hassani means handsome in Swahili. I immediately fell in love with the name and when I added it to Ric, it was just perfect and sounded respectable.”

The Search For A Hit Song

By 2012, Ric Hassani had returned to Nigeria with a degree in Energy Economics, ready to tow a fresh part as a singer. For an artist that had given over four irrecoverable years (2007 – 2011) of his life to music, it comes as no surprise that Ric Hassani’s music upon his return to Nigeria was driven by the need to gain profound rewards in the purse and a large cheer amongst the crowd. Music had seen him risk it all.

During his days as Rico Slim, amongst many other sacrifices, Ric was homeless. He squatted in the apartment of famed Nigerian singer and producer, Samklef for nearly two years before travelling to the UK for his masters.

His desire to make a quick rise from obscurity to prominence and perception of what was deemed sonically acceptable caused him to once again alter the direction of his music. With his debut single dubbed Dance Dance Baby, Hassani made an attempt to score a pop hit. “It was me again, trying to be what I was hearing on the radio. Trying to be Flavour, Iyanya… I tried that and it again just wasn’t me.”

Although pop music appeals to the larger populace and typically yields fortune as a result, Ric Hassani was one that didn’t find favour in that space. He once again found himself in a state of unfulfillment and perhaps worse, he had landed in a financial crisis.

Over two years had passed since he changed his identity and took the singing route yet nothing seemed to be working. Circumstances had forced him to begin borrowing money from his mom and family members just to stay afloat. The singer was on the brink of getting a job as a banker before his breakout single, Gentleman happened.

A gutsy resolve to follow his heart and retire from attempting to fit in led to the creation and release of Gentleman in December 2015. “Gentleman is the first song I went to the studio and said you know what, let me just make a song that I personally like. Before, I was making songs that I felt people would like. With Gentleman, I was not thinking about people, I was not thinking about what was trendy at the moment. It was the first song that I really liked”.

Sonically contrasting to what was popular, the slow-tempo record embodied minimalistic local percussions, acoustic undertones and lyrics that transcend the ears to the heart. The success of Gentleman established the template for his distinct sound and served as a catalyst for what would be best described as a laudable streak that is yet to see its end.

Ric Hassani stands today as a revered Nigerian singer whose music pops beyond the boundaries of the country. His ear-soothing sound can be abundantly accessed on his impressive 2017 debut album The African Gentleman which accommodates a slew of solid records including the number-racking Only You.

The love-anthem has garnered a cumulative of over 15 million YouTube views on the singer’s channel and his breakout hit, Gentleman landed him multiple award nominations including two Headies and three All Africa Music Awards (AFRIMA).

These days, Hassani is found assisting or enlisting some of Africa’s biggest music stars like Falz and Olamide or performing with his boy-band across the continent. His recent exploration is a just-concluded tour in Mauritius which as we have accurately gathered pulled in up to 37,000 dollars.

During his week-long stay on the Island, Hassani held a solo concert at a 5,000 capacity open-air venue from which he made 30,000 dollars as we have been told. He would later make three club appearances; one for 3,000 dollars and the others for 2,000 dollars each hence 37,000 dollars which after conversion is a whopping 13 million naira.

The singer also hosted a charity event that yielded up to 6,000 dollars from merch sales, autographed posters and donations. All proceeds from the charity event were donated to aid the academic pursuit of less privileged kids in the neighbourhood through school supplies et al.

On how he is expanding the reach of his music, Hassani reveals that his moves are mostly data-driven. “For Mauritius, our song was organically number two on the iTunes chart so when I saw that, I decided to do sponsored ads on social media targeting them.

We also reached out to some DJs and OAPs there and naturally, show promoters started calling. The funny thing is Mauritius is not an English speaking country, we even had to get translators during rehearsals. It’s crazy.”

Also very worthy of note is that Ric Hassani operates as an independent artiste. His music is self-funded through his umbrella imprint, Riverland Records. Discussing why he has refrained from penning a record deal, the singer stated that his decision is rooted in firm knowledge of what he needs.

“It’s just about knowing what you need. Of course, all these deals are good but it may not work for you. We know where we are and what we need. When the time comes for that, we will accept a label offer.”

A New Album Is On the Way

Two years after his debut project, Ric Hassani has revealed that his sophomore album is ready and will be released in the third quarter of the year. “August and September are my lucky months. My last album was August 31st”.

On the direction of the forthcoming project, the singer reveals that it incorporates a more storytelling and conversational approach. The new album as he explains will carry heavier undertones as opposed to his former which was mostly acoustic.

Related Topics:mauritiusRic Hassani
Up Next

“I’m A Beautiful Girl, Don’t Ever Refer to Me As Bro” – Bobrisky Warns Nigerians