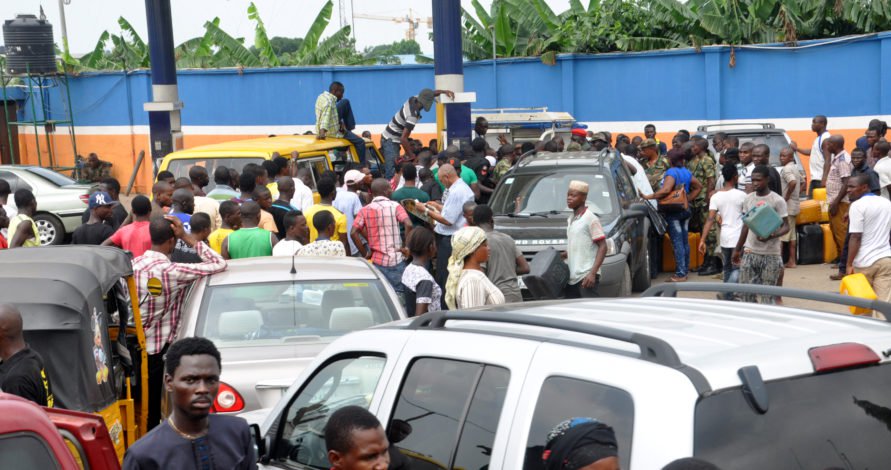 The Group Managing Director of the Nigerian National Petroleum Corporation (NNPC), Mr. Maikanti Baru, on Sunday disclosed that the current Landing Cost of petrol is N171 per litre, meaning that at N145 per litre, the Federal Government is currently paying a subsidy of N26 on a litre of the commodity.

Speaking with reporters in Abuja, he said that the normal consumption of PMS in Nigeria had risen to over 50 million litres per day, due to hoarding and diversion, mainly as a result of cross-border smuggling, due to the PMS price disparity that exists between Nigeria and its neighbours.

Commenting on the Landing Cost of PMS, Baru said the Cost, Insurance and Freight price of PMS was $620 per metric tonne, adding that at N305 to a dollar, the landing cost translates to N171 per litre.

Baru said the Federal Government has given approval for preferential and speedy treatment to be given to vessels carrying Premium Motor Spirit (PMS), also called petrol, to end the lingering crisis in Nigeria.

According to him, the Nigerian Navy, Nigerian Ports Authority, NPA, Customs and the Nigerian Maritime Administration and Safety Agency, NIMASA are currently expediting the clearance of fuel vessels and anchorage services to facilitate speedy product transfers to various depots including during weekends and public holidays.

The NNPC helmsman noted that President Muhammadu Buhari is deeply concerned about the fuel crisis and had ordered al stakeholders involved, including security agencies to ensure a speedy resolution of the situation.

In addition, he disclosed that the NNPC had commenced a 24-hour loading and sales operations at all depots and its mega stations across the country.

“Major marketers were also advised to carry out 24-hour operations, most of whom have been complying. This has increased load-out from the Depots significantly and continuous sales at the filling stations nationwide,” Baru noted.

He also declared that over the last two weeks, the national truck-out capacity has been beefed up to an average of l,500 trucks, about 52 million litres per day, which he explained, was higher than the normal consumption of 850 trucks per day.

Furthermore, the NNPC boss stated that currently, 13 vessels, with an average capacity of 650 million litres, are discharging the commodity at different ports across the country, while noting that three vessels with the commodity are coming in before the end of the week, bringing the combined quantity of the product in depots to 814 million litres of petrol till the end of the month.

He added that 14 shuttle tankers, with a combined capacity of 187 million litres of the commodity would also be discharging the product at various destinations across the country in the next three days.

Also, to ensure the speedy resolution of the crisis, Baru disclosed that the NNPC had activated the ‘Fuel War Room’, comprising the NNPC, Department of Petroleum Resources, DPR, Petroleum Products Pricing Regulatory Agency, PPPRA and the Petroleum Equalisation Fund, PEF.

He said the team is tasked with the responsibility of coordinating all intervention activities for supply and distribution of PMS nationwide, adding that with the support of security agencies, the team, with the support of Security Agencies, is already working round the clock to ensure a speedy resolution of the current fuel situation.

He explained that with all these measures, and if full compliance is achieved, the crisis would end within the next two days, adding that efforts have been put in place to ensure the crisis did not go beyond this week.

Baru also accused black marketers of sabotaging efforts to end the fuel crisis, stating that most of the peddlers, permanently put their vehicles in queues at petrol stations, and after purchasing, discharge the products into containers and return to join the queues.

Related Topics:PETROL SUBSIDY
Up Next