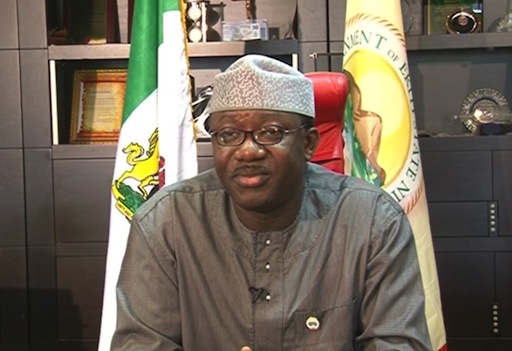 The Kayode Fayemi administration in Ekiti state awarded a N600m contract to a company with no fixed address, the Judicial Commission of Inquiry set up by Ekiti State Government said.

The commission headed by Justice Silas Oyewole to look into the financial transactions of the state during Fayemi’s tenure, late on Wednesday submitted its report to Governor Ayo Fayose. Fayemi, now the Minister of Solid Minerals was the governor between October 2010 and October 2014.

In a reaction on Wednesday night, Fayemi rejected the report and said he would take his case to the Appeal Court.

In some of its other findings, the commission said that the former governor must account for the whereabouts of N2.75 billion allocated for the execution of the construction of Ultra-Modern market in Ado Ekiti. The money was part of the N25 billion bond raised by the government .

The commission said the contract was never executed.

The commission of Inquiry said KITWOOD Nigeria Limited, the contractor who handled the furnishing of the government house built by the Fayemi administration at a cost of N600million should be made to refund N324.8 million. It said the contract should not have been more than N280 million.

The Commission said it found out that KITWOOD had no traceable address and that “the address on the Letter of Award is a virgin land opposite the new Central Bank on the New Iyin Road, Ado Ekiti.

Both Fayemi and the commissioner for Finance snubbed the commission and made a futile effort in the court to shut it down. Fayemi in a reaction said he would appeal the judgment.

On the purchase of vehicles, it said “claim by Coscharis Motors that it supplied 235 and/or 250 vehicles was fraudulent and fraught with so many contradictions”.

It faulted Coscharis Motors claim it supplied seven vehicles at the Ibadan Liaison office of Ekiti State, when the state does not have such an office. The vehicles, it said, were received by unidentified persons.

It also claimed that Coscharis Motors only supplied 219 vehicles to the Ekiti State Government and that 17 Joylong Buses supplied as gift were later carted away.

On the controversial N852.9 State Universal Education Board (SUBEB) fund, the commission said it was clear that the Government of Dr Fayemi hoodwinked the federal government into paying its own matching grant by obtaining N852, 936,783.12 loan from Access Bank on November 25, 2013 without perfecting documentation in respect of the loan, thereby flouting the provisions of Section 11(2) of the UBEC Act, 2004.

Governor Fayose said asking people to account for their stewardship should not be termed witch hunting, as leaders must be accountable and that Ekiti people have the inalienable rights to know how their commonwealth was being used.

“I appreciate the panel members for a thorough job done. The time and energy they put into the job. The panel waited for the outcome of the court case instituted by former Governor Kayode Fayemi before it concluded its job because we are ardent believers in the rule of law and if the court had ruled that we should stop, we would have stopped.

“There is no witch hunting in a situation whereby people are asked to account for their stewardship. I am glad that the Federal Government is also pursuing the policy of accountability and we are following suit here too,” he said.

After receiving the report, Fayose inaugurated a four-man administrative panel to study it and come out with a White Paper.

The administrative panel is headed by the Commissioner for Justice, Mr Kolapo Kolade.

Earlier, Justice Oyewole said though the panel was given three months to do its work when inaugurated in May this year, it had to bid its time to see the end of the litigation by Fayemi.