LSDPC staff arrested for attempting to jump inside Lagoon 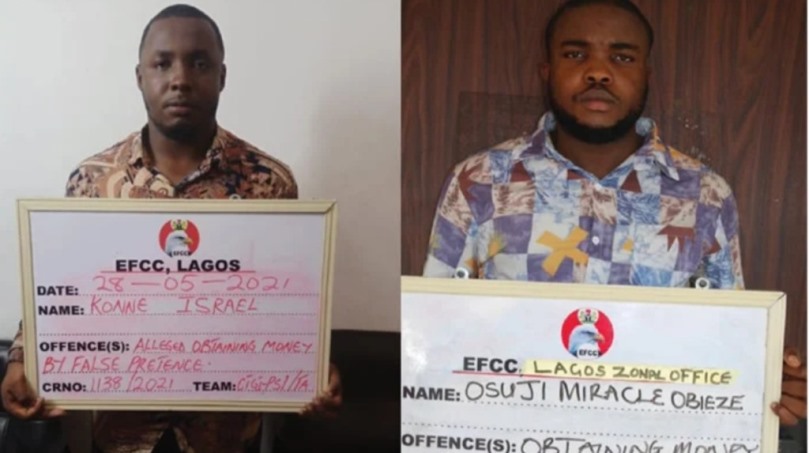 
Officials of the Lagos zonal office of the Economic and Financial Crimes Commission (EFCC) have arrested two suspected fraudsters, Konne Barieeba and Osuji Obieze, for allegedly obtaining the sum of N768,585,000 by false pretences.

A statement by Head of Media and Publicity of the EFCC, Wilson Uwujaren, said the suspects, together with one Obialor Worenwu, who is now at large, allegedly approached an investment company, Luxury Gold, for loan facilities, stating that the sum of N110m was paid into the GTBank account of Barieeba, while the sum of N255m was paid into the First City Monument Bank account of Obieze.

The statement partly read, “The third suspect, Worenwu, also received the sum of N403,585,000 in his GTBank account. The petitioner also alleged that the loans were to be repaid in March 2021.

“However, all efforts by the petitioner to make the suspects repay the loans proved abortive.

“Investigations revealed that the suspects, who were arrested sometime in June 2021, diverted the money obtained from Luxury Gold to their personal uses and also bought cars, jewellery and landed properties.”

It said that landed properties acquired with incomes of the crime were also recovered from the suspects, stating that they would soon be arraigned.

Related Topics:EFCCLAGOS STATE
Up Next