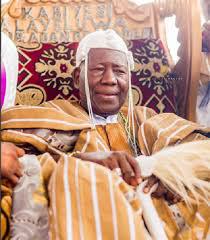 The Chief of Army Staff (COAS), Lieutenant-General Yusuff Tukur Buratai has described the death of the first wife of Olubadan of Ibadanland, Oba Saliu Akanmu Adetunji, Olori Kudirah Adetunji as not only a great loss to the people of Ibadanland but to Nigerians in general.

Buratai who stated this on Friday during a condolence visit to the monarch at his Popoyemoja Palace, prayed to God to give the family the fortitude to bear the loss.

The COAS who was represented by the General Officer Commanding (GOC), 2 Division, Nigerian Army, Odogbo Barracks Ibadan, Major General Chukwunedum Martins Abraham said he received the news of the demise of the first wife to the Olubadan with shock.

The COAS while commending the monarch for his role in nation building also reiterated the commitment of the Army in maintaining peace and harmony in the country.

The Olubadan while speaking during the visit commended the COAS and the GOC for the roles they are playing in defending the country against internal or external aggression.

Olori Kudirah Adetunji died in the early hours of yesterday (Thursday) at the age of 71.

Until her death, she was the Iyaloja of Bolade, Oshodi Market, Lagos and has been buried according to Muslim rites.

She was survived by her husband, the Olubadan, many children and grand-children.