Buhari endorses Fayemi, says he has what it takes to win Ekiti governorship election
Advertisement 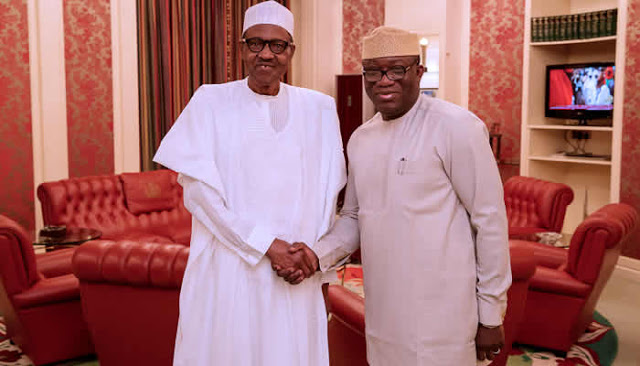 Nigeria’s President Muhammadu Buhari on Sunday expressed the belief that the Minister of Mines and Steel Development, Dr. Kayode Fayemi’s track record in Ekiti State would bolster his chances at the forthcoming governorship election.

Buhari said this while congratulating the former governor for winning the All Progressives Congress ticket to contest the July 14, 2018 governorship election.

The President’s congratulatory message was contained in a statement by his Senior Special Assistant on Media and Publicity, Garba Shehu.

Buhari also urged those who contested against Fayemi for the ticket to keep upholding the values and philosophy of the party by supporting the APC candidate in the forthcoming election.

“President Buhari commends all the participants in the keenly contested primary, who passionately worked hard to serve the state as governor, urging them to keep upholding the values and philosophy of the party by supporting the APC candidate in the forthcoming elections.

“President Buhari believes that Fayemi’s track record in the state as a reformist, with a penchant for building educational infrastructure and promoting the welfare of the ordinary people, will bolster his chances at the forthcoming polls.

“The President notes that the successful primary in the state, with more than 30 aspirants, further validates the credentials of the APC on internal democracy, and its preparedness to take the country to another level of development.”

Meanwhile, The PUNCH learnt on Sunday that Fayemi will this week resign his position as the Minister of Solid  Minerals and Steel Development.The minister had on Saturday night emerged as the APC candidate for the election in a keenly contested primar.

He secured 941 votes as against 481 votes polled by his strongest contender, Segun Oni, who is also a former governor of the state.

Fayemi was in April granted a one-month leave of absence by President Buhari to enable him to take part in the primary.

Our correspondent gathered that the one-month leave would expire this week.

However, having won the primary, sources close to Fayemi said the minister would not return to his office as a substantive minister.

Fayemi, it was learnt, was not ready to delay his campaign in order not to jeopardise his chances during the election.

The source said the late open declaration of the former governor for the race nearly cost him the ticket as many of his initial supporters had declared their loyalty to other aspirants.

The source said, “Fayemi will be in Abuja either on Monday or early Tuesday to submit his letter of resignation to President Muhammadu Buhari.

“Though he could still remain in office till June, at least a month before the election, he needs to be on the ground in Ekiti earlier than that.

“Remember that his late declaration for the position worked against him during the primary as many of his supporters had already started working for other aspirants.

“Because they had declared their loyalty to these aspirants, it was very difficult for the minister to ask them to return.

“But this time round and having emerged as the party’s candidate, we want all of them to return and that can only be achieved when Fayemi returns home fully to take charge.”

Efforts made to speak with the minister on Sunday were not successful as calls made to his telephone indicated that it was switched off.

The minister had earlier told our correspondent that he only took a month leave of absence from office to enable him to contest the party’s governorship ticket.

Meanwhile, our correspondent also gathered that Fayemi had started consultations on who would be his running mate.