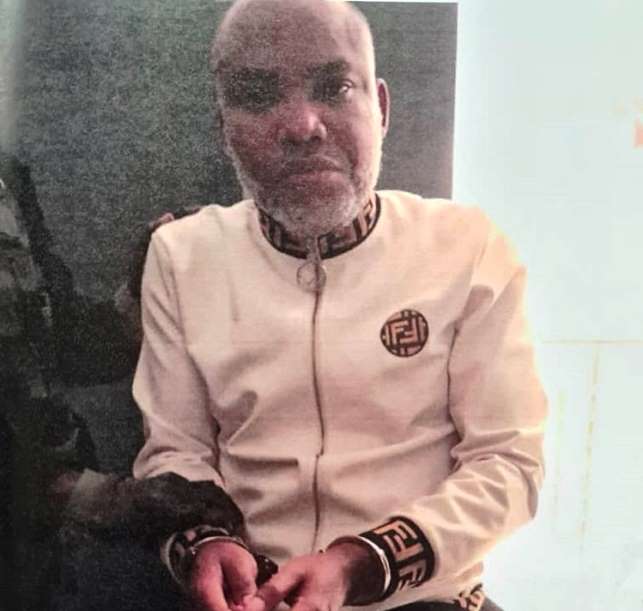 The British High Commission and a law firm in London, Bindmans, have sought the approval of the leader of the proscribed Indigenous People of Biafra (IPOB), Nnamdi Kanu, to take over his case.

Top Naija learnt, on Thursday, that Aloy Ejimakor, the Nigerian lawyer of Kanu delivered two forms to the IPOB leader on Wednesday during a visit to the office of the Department of State Services (DSS), where he is being in detention.

Ejimakor disclosed to our reporter that the development would open up a new chapter in the trial of Kanu, stating that the Nigerian Government would be served with summons to bring him to the United Kingdom, where another case would be heard over the manner of his rendition to Nigeria.

He said, “I went to visit him on Wednesday and went with two forms. One was the consular consent form that the British High Commission required that he signs to consent to consular assistance. There was also a form from his counsel in the UK. The firm is known as Bindmans, one of the largest law firms in the UK.

“The forms will open a whole new chapter of legality, including the filing of a Writ of Mandamus, against the Nigerian government in a UK court to compel it to produce Kanu, because his detention is illegal under the British law. It was an extraordinary rendition, which is an international crime by which a state kidnaps a suspect or a fugitive without the due process of law.

“They will be filing all these processes in the UK and there is a prospect of a UK court assuming universal jurisdiction or extra-territorial jurisdiction and reaching into Kenya so that they can arrest every Kenyan official, either authorised or not, and every Nigerian official involved in this case.”

The lawyer added that the DSS collected the forms, saying they must first go through vetting from its legal unit.

Ejimakor said in spite of being informed that he would collect them on Thursday, he had not been contacted by the government agency.

He declared that during his three-hour meeting, Kanu gave a clear account of how the Nigerian Government hired agents, who kidnapped and flew him into the nation.

While quoting the IPOB leader, he said Kanu was blindfolded and flown on a private jet without any extradition hearing or immigration process.

He said, “Kanu said he was flown to Abuja in a private jet on Sunday, June 27, 2021, from the Jomo Kenyatta International Airport, Nairobi, and that he was the lone passenger.

“He was blindfolded and driven to the tarmac very close to the plane without passing through the airport immigration.

“The plane departed Nairobi around 12pm and arrived in Abuja in the evening.

“Kanu was tortured and subjected to untold cruel and inhuman treatment in Kenya. He said his abductors disclosed to him that they abducted him at the behest of the Nigerian government.

“The people that abducted him said they were told by their sponsors that Kanu was a Nigerian terrorist linked to Islamic terrorists in Kenya, presumably Al-Shabab. But after several days when they discovered his true identity, they tended to treat him less badly.

“Despite that, they told him they felt committed to hand him over to those that hired them.

“According to Kanu, no warrant of arrest was shown to him or even mentioned to him. And for the eight days, he was held incommunicado, nothing of presenting him before a court or transferring him to an official detention facility was ever mentioned. He was held in a nondescript private facility and chained to a bare floor.

“Kanu was interviewed for the first time in my presence by three DSS officers. The interview was revealing as it contained certain new allegations that were never heard of before. But all the questions relate directly or indirectly to his status as the leader of IPOB.”

The lawyer disclosed that in the face his client’s ordeal, he was in cheerful mood.

Related Topics:DSSfeatureIPOBNnamdi Kanu
Up Next

ECOWAS calls for revenue mobilisation for Nigeria, others

WhatsApp to let users send messages without using their phones