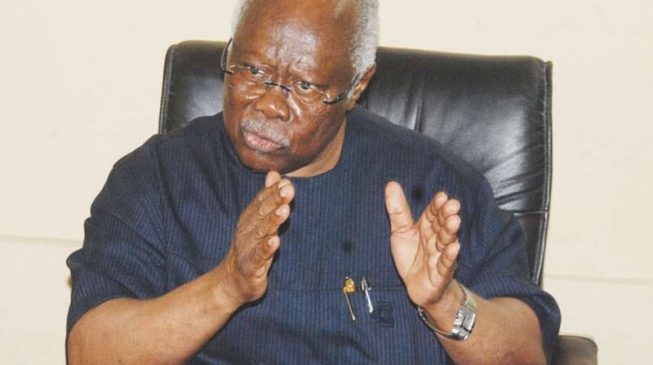 Olabode George, One of the nine aspirants jostling to become National Chairman of the Peoples Democratic Party (PDP), has explained the real reason for his withdrawal from the race.

He insisted that he did not step down for another candidate and also raised concerns about the fallout of the convention.

According to him, he withdrew because the South West was already cheated with the entrants of aspirants from the South-South.

George made it clear he stands with the micro-zoning principal of the party, which has been abandoned.

He also blasted Rivers Governor, Nyesom Wike, for abusing the Yoruba people on a national television, when he said the South West has never contributed anything meaningful to the success of the PDP.

Below is the full text of his speech at the press conference where he backed out of the race:

Since the ancient days when the Yoruba people began their historical challenges on the plains and the hills of Ile-Ife, we have always been defined by our instinctive integrity, our methodical industry, our consistent loyalty and our steadfastness in protecting and defending the truth.

It is in all these characterization that I have personally lived my life. It is in all these summative portraits that I have pursued my personal and political engagements, strengthened in the resolve that truth, sincerity of purpose, fearlessness, equity, ethical balance are the basic ingredients of a purposeful life.

I have gone through many travails in my life. I have climbed the highest hills. and I have been through the lowest valleys. But in all, I have been guided by the holiest of heart’s affection, the genuine and the utmost surrender to the will of the Lord.

But I have never been afraid of a good fight. I have never disengaged from a meaningful challenge. I have always committed myself to any struggle with absolute dedication and unflinching, resolute vision.

It is in this spirit and clarity of selfless engagement that I decided to run for the National Chairmanship position of our great party. I did not enter the contest for any personal benefits. I did not throw myself into the fray because of some pecuniary benefits.

I have come to serve. I have come to offer myself because I believe in the greater glory of our party and in the growth and development of our nation. I have served continuously for 10 years in various high level positions in our party administration, including the second highest echelon of Deputy National Chairman.

With all sense of humility, I can say that I know the workings and all the administrative processes and the tools of making our party work.

That shattering and very divisive crises of the last two years have made our party very vulnerable, weak and basically tottering on the edges of the cliff.

Less than one year before the next general election, our party must now elect new managers to direct our affairs. The foremost of these new managers is the position of the National Chairman.

In this highly challenging scenario, the party naturally needs an experienced, trusted, proven, reliable and astute administrator who can guide our party to the land of redemption and the land of triumphant rebound.

It is in this vein that I have offered my humble service to lead our party.

But more importantly, I have entered the contest on the fundamental predication of the micro-zoning principle as laid down by our founding fathers.

The zoning principle, which was publicly reinforced last year in Port Harcourt, had specifically and rightly affirmed the South-West as the zone to produce the National Chairman. This binding proclamation was based on equity, fairness and natural balance that hold any organisation together.

But this old, legitimate and morally sound micro-zoning principle has now been trashed, dumped in the waste bin, flung into the gutter by very little men who have compromised the pivotal moral anchor of civilised engagement for temporary selfish gains.

Everywhere you look, the Yoruba people are now being brazenly insulted. The very traditional fiber of our founding fathers is now being trampled upon, debased and soiled by external forces and mercenary traitors within.

It appears the PDP is now bent on self-destruction. It has obviously allowed money moguls to dictate its thematic largeness. The party has lost its soul. It has lost its principled beginning and the predications of righteousness. It has traded the finer principles of democratic guidance and equity for the squalid, dirty and shameful resort to mercenary agenda where nothing matters save the putrid, oafish gains of the moment.

I cannot be part of this screaming aberration. And as the Atona of Yoruba land, I do not expect any well-meaning, well disciplined, forthright, sincere Omoluabi of Yoruba land to continue with this deceit and shameful theater.

The Peoples Democratic Party has now mangled and distorted its soul and spirit. There is no morality here anymore. There is no sanity or any sense of enlightened civility.

As a result of these observed aberrations wherein the position of the National Chairman has been apparently sold and auctioned to the highest bidder, I, as an Omoluabi and as an authentic Atona of Yorubaland, will not partake in this charade.

I, hereby, withdraw from this brazen fraud and absolutely preconceived, monetized, mercantilist convention.

The Yoruba people have been openly maligned. The Yoruba have been savaged, tormented, treated with contempt, scurried, scoffed at, humiliated and denigrated by little men whose sun will soon set.

As a Yoruba patriot and the pathfinder of Yoruba land, I will stand by our people, I will stay with them thick or thin, I will fight for their good cause without compromising any ethics.

The Governor of Rivers State, Nyesom Wike must as a matter of priority and ethical importance tender unreserved apology to the people of Yoruba land for his unguarded utterances on national television this morning. It was a show of shame.

I thank you all for listening.

MTN out as Airtel, Glo, Smile close in on buying 9mobile