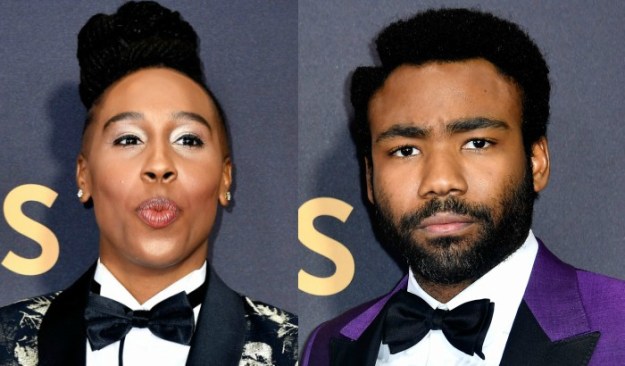 Donald Glover and Lena Waithe made history on Sunday, the 17th of September as they both became the first blacks to win the Emmy Awards in comedy series directing and comedy writing respectively.

The 69th Annual Primetime Emmy Awards was held on Sunday at the Microsoft Theater in Los Angeles to honor the best in US prime time television programming.

Donald Glover became the first black person to ever win the Outstanding Directing In A Comedy Series award for his hit TV show “Atlanta.”

He also won Outstanding Lead Actor in a Comedy Series as well, for his part of Earnest “Earn” Marks in “Atlanta,” giving him two awards for the night.

He thanked his parents and the writers on the show. He then went ahead to jokingly thank President Trump for “making black people number one on the most oppressed list.” “He’s the reason I’m probably up here,” he said.

Mandatory Credit: Photo by Invision/AP/REX/Shutterstock (9065833ai)
Lena Waithe poses in the press room with the award for outstanding writing for a comedy series for the “Master of None” episode “Thanksgiving” at the 69th Primetime Emmy Awards, at the Microsoft Theater in Los Angeles
2017 Primetime Emmy Awards – Press Room, Los Angeles, USA – 17 Sep 2017

In her acceptance speech, the actress thanked the LGBTQ community. She said;

“I see each and every one of you, the things that make us different, those are our superpowers. Every day when you walk out the door, put on your imaginary cape and go out there and conquer the world because the world would not be as beautiful as it is if we weren’t in it.”