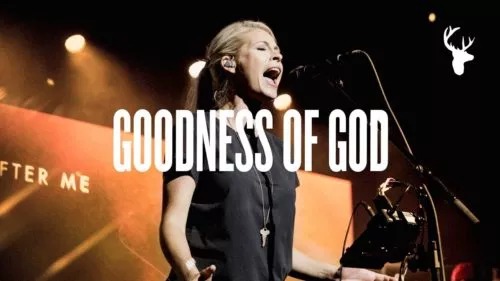 “Goodness of God,” a new praise song from Bethel Music, is out now.

The song “Goodness of God” is an astonishing and extraordinary song that inspires one to look past unfulfilled expectations and unmet needs to recognize the wonderful things God has done.

“Goodness of God” by Bethel Music is a fantastic work that required the efforts of several incredible people to put together. Jean Johnson, Brain Johnson, Ed Cash, Ben Fielding, and Jason Ingram composed and wrote it.

This song was published on November 19th, 2019 and is the third single from their album titled “Victory,” which is Bethel Music’s eleventh live album.

Goodness of God was released as one of four promotional tracks from the album “Victory” by Bethel Music in early 2019.

There’s a widespread saying that “two good heads are better than one.” This music has proved this assumption correct.

The beauty of this song was the result of the hard work of talented songwriters who chose to collaborate as one despite their differences.

It is vital to remember that Jenn Johnson wrote this song. She told Fox News about the fascinating tale behind this incredible song.

According to her, the Goodness of God was inspired by the process of adopting her fourth child; she couldn’t help but think about God’s faithfulness and kindness at this point, so she began to write about it.

“Goodness of God” is more than a song; it’s an anthem that has spread over the globe and received several accolades.

“Goodness of God” is at No. 15 on the Hot Christian Songs list in the United States. It was also nominated for the 2020 GMA Dove Award for Worship Recorded Song of the Year, in addition to numerous other honors handed to Bethel Music as a result of this song.

Many renowned singers and music bands, like Cece Winans and Marvrick City, have performed their own versions of “Goodness of God” since its debut.

“Goodness of God” is composed in the key of A, with a moderate rock speed of 63 beats per minute and a 4/4 time signature.

Listen to and share “Goodness of God” by Bethel Music below.

Related Topics:Bethel Music – Goodness of God
Up Next