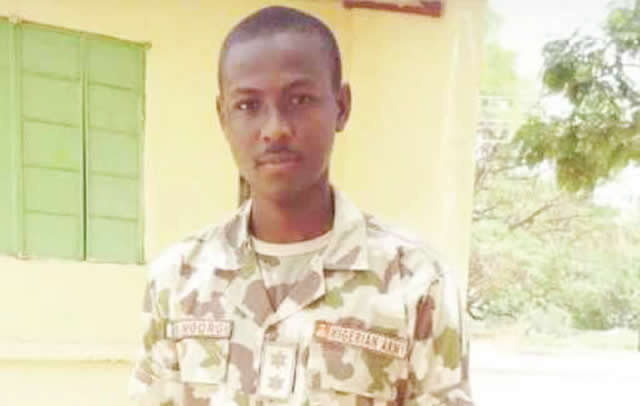 A Nigerian soldier serving with the 202 Battalion of the 21 Special Armoured Brigade, Bama, Borno State, has shot dead his adjutant, Lt. Babakaka Ngorgi, for allegedly refusing to give him a travel pass to enable him resolve his inability to access his salary account, which had been frozen for about eight months, TopNaija reports.

The private, whose identity is yet to be ascertained, was said to have fired some rounds at the officer, who was making a phone call in front of the unit headquarters on Wednesday.

The killer soldier was immediately taken into custody at the scene of the incident, while the remains of the officer were evacuated to the 7 Division Medical Services and Hospital. The shooting reportedly threw the officers and men of the 202 Battalion into confusion.

Military sources said the suspected killer’s bank account was frozen by the authorities because he went AWOL (away without official leave) for six months.

He was said to have returned to his unit in Bama and had been pestering the deceased to give him a travel pass so that he could sort out the problem, but Ngorgi reportedly refused to accede to his request.

But the matter took a tragic turn when the soldier went to the deceased’s office and gunned him down. Ngorgi, according to reports, got married last December.

A source said, “The tragic incident occurred at the 202 Battalion, Bama, when a soldier shot his adjutant. They had a disagreement over an undisclosed issue.

“In addition to that, the adjutant refused to give the soldier a pass to go and solve his problem after eight months without salary and allowances. The soldier had gone AWOL for six months and his account was frozen. So, on Wednesday morning, he emptied his magazine of 30 rounds on the officer. The soldier was arrested and handcuffed immediately.”

TopNaija gathered on Thursday that Military Police investigators had commenced investigation into the incident. The acting Director, Army Public Relations, Col. Musa Sagir, confirmed the incident in a statement.

He said, “A trooper of the Nigerian Army serving in the 202 Battalion of the 21 Special Armoured Brigade, Bama, Borno State, went berserk around 10.30am on July 29, 2020, and fired at an officer (a Subaltern), which led to his death.

“The incident happened when the soldier approached the officer, who was standing in front of the unit’s headquarters and making a phone call. The soldier has been arrested and is undergoing investigation. The general situation in the unit is calm.”

How UI student was crushed to death by soap-making machine