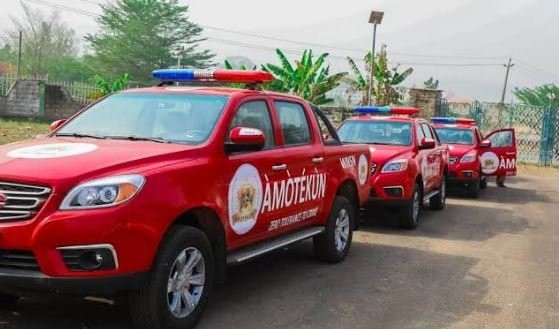 Amotekun corps has rescued a man, who maintained his innocence after being caught with mutilated human body parts, from public lynching on Wednesday.

The man, whose identity could not be ascertained immediately, was attacked and almost lynched by a crowd, after some residents who were suspicious of his movement alerted security agents.

A video footage recording showed the suspect being beaten with sticks and cursed by bystanders as he was made to bring out mutilated human body parts from a bag.

The suspect,  could also be heard denying involvement in ritual killing and cursing people he said had set him up.

Members of Hunters Group of Nigeria and Amotekun Corps were reportedly called to the scene of the crime to maintain order as residents attempt to lynch the man.

Speaking on the incident, the Chairman of OlaOluwa South East Local Council Development Authority, Sunday Olaifa, said that he had to rush to Igege community to appeal to the residents.

He also demanded thorough investigation into the matter in order to ensure that justice was served.

He said, “Going by what the suspect said when I got to the scene, there is need for thorough investigation. The suspect said his step-daughter fought her husband and he intervened and took the woman away from the husband.

“And because of that, the husband vowed to implicate and send him to prison for taking the woman away from his house. When I asked security men how they got the information, I was told someone called to inform them about it.

“The informant eventually turned out to be the same husband who had vowed to implicate the man. In that wise, we have to be very careful and investigate properly in order to ensure justice.”