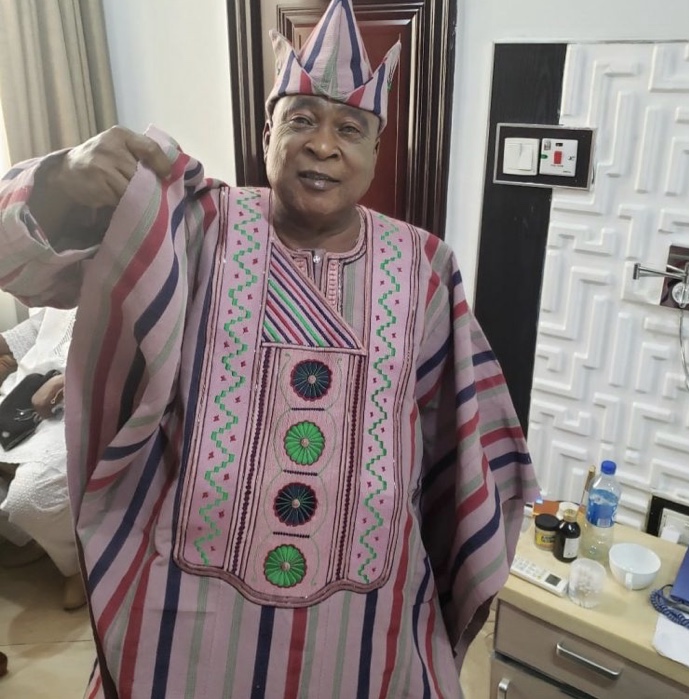 All you need to know about Alhaji Rasaki Kolawole popularly know as Ayinla Kollington or Alhaji Kebe ‘n’ Kwara or Baba alagbado Let’s take a look at his Biography, Nationality, Career, Age, Net worth, Family

General Ayinla Kollington born August 20 1953 is a Nigerian Fuji musician from Ilota, a village on the outskirt of Ilorin, Kwara State, Nigeria. He is also called Baba Alatika, Kebe-n-Kwara, Baba Alagbado.
EARLY LIFE
Alhaji Kebe ‘n’ Kwara was recruited by the Nigerian Army during the Civil War and this was where he learnt the rudimentary of music.
EDUCATION
He had his early education at Muslim Mission School and the Model School, Mushin, Lagos. He later studied typing and other commercial related classes at Yaba polytechnic.
CAREER
Kollington’s music career started in 1965,  when he won a competition organized by the late President of Nigeria, Dr. Nnamdi Azikiwe. He started recording for Nigerian EMI in 1974.

He introduced the powerful bata drum which was unlike  his contemporaries who relied on talking and Squeeze drums and he changed the band’s name to Fuji 78 and in 1982, set up his own label, Kollington Records when fuji was beginning to seriously rival Juju as Nigeria’s most popular contemporary roots music

He ranks second to Late Barrister Ayinde  in fuji and  for this, there was perceived rivalry between the two which was however settled before Barrister’s death.

Ayinla ranks alongside his friend and competitor Ayinde Barister as the two most important artists to dominate Fuji music from its inception in the 1970s through to the 1990s by which time it had grown to become one of the most popular dance genres in Nigeria. Between the mid-70s and late 80s, Kollington ranked with Barrister as the leading star of Nigerian fuji music – like apala and waka, a Muslim-dominated relation of juju, retaining that style’s vocal and percussion ingredients but abandoning its use of electric guitars in order to obtain a more traditional, roots-based sound. He began recording for Nigerian EMI in 1974, and in 1978 achieved a pronounced, but temporary, lead over Barrister when his introduction of the powerful bata drum (fuji had until that time relied almost exclusively on talking, or ‘squeeze’, drums) caught the imagination of record buyers. In 1982, when fuji was beginning to seriously rival juju as Nigeria’s most popular contemporary roots music, he set up his own label, Kollington Records, through which he released no less than 30 albums over the next five years. As the popularity of fuji grew, and the market became big enough to support both artists, Kollington and Barrister’s enmity diminished.

By 1983, both men were able to stand side by side as mourners at the funeral of apala star Haruna Ishola. A new and equally public rivalry emerged in the mid-80s, this time with waka star Queen Salawah Abeni, who exchanged bitter personal insults with Kollington over a series of album releases and counter-releases. Sadly, for non-Yoruba speakers, the verbal fisticuffs remain unintelligible, though the drum-heavy, hypnotic music was universal in its appeal.

At the start of the 1980s Ayinla started his own record company, Kollington Records, to release his music and remains to this day an extremely prolific artist, having recorded over 50 albums, most of which have never been released outside of Nigeria.

In 2019, Ayinla revealed that he dropped military from music.
FAMILY
He was born to the family of Salawu Balogun who was a trader from Ibadan,and his father was a butcher.

He is married to many wives and has many children one of which is Salawa Abeni and they have three children. His son, Sheriff is also into music.
PERSONAL LIFE
Ayinla kollington said that— I was at the State House in Marina, Lagos to receive a trophy and a certificate of merit and it felt great,” he says. But even at then playing music was not on full time basis until inspiration came when he enrolled in the Nigerian Army and met Barrister. “My late friend, Alhaji Sikiru Ayinde Barrister encouraged me to take my musical career to the next level. We were soldiers and Barrister would come all the way to Abeokuta, Ogun State to pressure me. He convinced me. He believed we needed to quit and go back to music.
ACHIEVEMENT
Alhaji Kollington feels very fulfilled at 62. “I made money from all my records”, he said with pride. “Ijo yoyo seems remarkable but I was sick at that time. I also got an award as the Best Fuji Artiste of the Year.”
NET WORTH
Alh. Ayinla Kollington is a legendary Nigerian singer and songwriter. His net worth is estimated to be over $450,000.