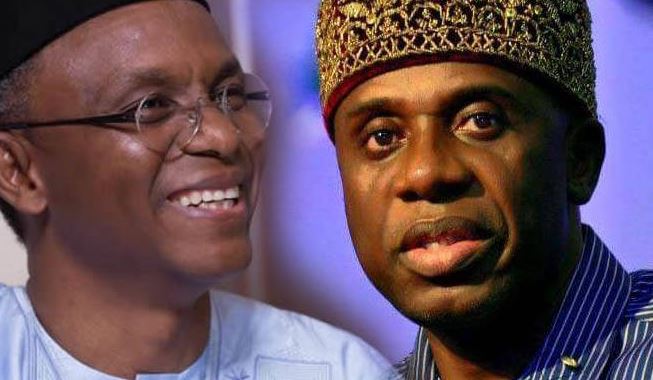 Fourteen governors belonging to the ruling All Progressives Congress [APC] are angry that they were deliberately not invited to two meetings organised by Kaduna State Governor Nasiru el-Rufa’i and Transport Minister Rotimi Amaechi all geared towards the 2019 elections, a top source in the ruling party told Daily Trust in Abuja yesterday.

The affair has already ruffled feathers within APC and the 14 governors are demanding to know why they were left out of consultations, the source said.

Daily Trust learnt that two were held in October and December, this year at the Abuja residence of Amaechi, who hosted the meeting together with Governor El-Rufa’i. Even though the meetings were initially billed as “political consultation,” they were actually meant to extract a pledge of allegiance to President Muhammadu Buhari to emerge as APC’s candidate

for the 2019 presidential election.

According to the top sources, the first meeting which took place in October was attended by Governors El-Rufa’i, Yahaya Bello of Kogi, Abdullahi Ganduje of Kano, Mohammed Abubakar of Bauchi, Tanko Al-Makura of Nasarawa and Ibrahim Gaidam of Yobe State.

Daily Trust learnt each governor was separately invited for “political consultation.” When each governor arrived, El-Rufa’i and Amaechi prevailed on him to pledge allegiance to President Buhari in 2019. Each of the governors did so, after which El-Rufa’i led them to attend congregational Friday prayers at the Presidential Villa Mosque on Friday, October 27, 2017.

Immediately after the prayers, the president received the six governors in audience. El-Rufa’i, who spoke on their behalf, said they were at the Villa to pledge allegiance to the President and assure him of their support in the 2019 election. Daily Trust learnt that Buhari thanked them for the visit but he did not say whether or not he will seek re-election.

Two months’ later according to our highly informed sources, Amaechi and El-Rufa’i invited another batch of APC governors to the Transport Minister’s Abuja residence. Those who attended the second meeting were Governors Simon Bako Lalong of Plateau, Mohammed Jibrilla Bindow of Adamawa, Samuel Ortom of Benue and Abubakar Atiku Bagudu of Kebbi. This meeting took place last Monday, December 18, 2017. Sources said the newly recruited governors were also invited for “political consultation” and they did not know the real reason for the invitation until they arrived at Amaechi’s house.

According to our top sources, there is a lot of speculation within APC as to the reason why 15 governors were not involved in the scheme.

The source said Governors Akinwunmi Ambode of Lagos, Rauf Aregbesola of Osun, Abiola Ajimobi of Oyo and Godwin Obaseki of Edo State were probably shut out because they are believed to be loyal to APC National Leader Asiwaju Bola Tinubu, whose loyalty to Buhari in 2019 is not certain. The source however expressed surprise that governors such as Ibikunle Amosun of Ogun, Abdulaziz Yari of Zamfara, Kashim Shettima of Borno, Aminu Masari of Katsina, Oluwarotimi Akeredolu of Ondo and Owelle Rochas Okorocha of Imo, who are also known to be loyal Buhari supporters, were kept in the dark by El-Rufa’i and Amaechi. The source noted that these governors are also known to be close to Buhari and that Okorocha has publicly endorsed Buhari for 2019 on several occasions.

The sources said Governors Abdulfatah Ahmed of Kwara and Abubakar Sani Bello of Niger “were probably left out because they are believed to be close to Senate President Abubakar Bukola Saraki,” who is thought to nurse presidential ambitions.

The source however said “it is not clear” Governors Aminu Waziri Tambuwal of Sokoto and Muhammad Badaru Abubakar were excluded from the meetings.

Another APC chieftain who also craved for anonymity told Daily Trust that many party chieftains believe that Governor El-Rufa’i and Minister Amaechi are laying the ground for a joint ticket which they hope Buhari will endorse in case he decides not to seek re-election in 2019. He said, “They are trying to ingratiate themselves with the president, to convince him that they are his most ardent backers. The trick is that if he decides not to run as they think he won’t, they believe he will endorse the two of them to grab the party’s ticket.”

The National Secretary of the APC, Alhaji Maimala Buni, said last night that as the ruling party, whatever the governors did legally in order to convince President Buhari to run for a second term is an endorsement of what the party had said repeatedly.

Buni said if really the governors had met with Buhari on 2019, then that should be a positive story for all well meaning Nigerians.

He said while Buhari continued to serve Nigeria and Nigerians, it should be seen as a legitimate venture if individuals or groups said he should be given a chance to continue.

“We are happy with the moves by our governors if really they made any such move to encourage Buhari to go for a second term and continue with the good work he is doing.

“Remember that we collectively passed a vote of confidence on the President during our last National Executive Committee (NEC) meeting in Abuja. We still stand by that; our president deserves our support.

“President Buhari has the right of first refusal. This is the tradition all over the world. As a party, we would keep to our promise through President Buhari in the areas of fighting corruption, security of life of Nigerians and revitalization of the economy through self-sufficiency in agriculture, power generation, infrastructure and education.

“Nigeria is on a path to glory through President Buhari; what the governors are doing is therefore legitimate, we are fully with them just the way Nigerians are truly in support of the president.