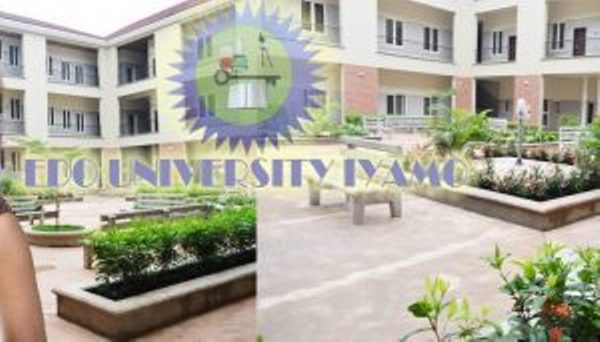 The Management of the state-owned Edo University, Iyamho,(EUI), says the institution was established to essentially cater for academically-endowed students and the wealthy in the society.

The Vice Chancellor(VC) of the institution, Prof. Emmanuel Aluyor, told the press men on Monday, in Iyamho-Uzairue, in the Estako-West local government area of Edo that “the idea behind the establishment of the University by the founding fathers is neither to replace nor compete with the existing Ambrose Alli University, Ekpoma”.

“But rather, to complement it in terms of providing world-class education with the best of infrastructure to academically-gifted students and the rich, who can afford the fees.

“People have questioned why former Gov. Adams Oshiomhole did not upgrade AAU, than establishing a new university altogether.

“Apart from its being capital-intensive to either renovate or bring in the needed infrastructure, the idea was to provide a different brand of education to the people.”

He said that the university offers world-class infrastructure and state-of-the art facilities hence the high fees.

“And that depends from which perspective you are looking at it.

“And only one or two public universities charge the same fees as us and that also depends on the quality of infrastructure and programmes on offer.

“The idea of the founding fathers is for anyone to have an ambiance of everything he desires abroad in any university environment here,’’ Aluyor said.

According to him, the university authority has also assembled first class academic and non-academic staff to complement the infrastructure and facilities, to ensure that the students are well groomed in character and in learning.

The VC added that management had introduced an entrepreneurship programme for its students to prepare them to “become employers of labour rather than those seeking for labour.

“We have, therefore, set up facilities for entrepreneurship training for all our students, irrespective of their course of study, to make them to become independent on graduation.

“We are proposing a grant of between N5 million and N10 million for any graduating student with the best entrepreneurship proposal.

“The University Council is still trying to fine-tune the modalities,’’ he said.

Aluyor disclosed that management abhors indiscipline among staff and students, hence the withdrawal of some pioneer undergraduates and erring staff.

“I am proud to mention that we have a dress code among our students, while all our lectures are multi-media assisted.

“We may not be proud of this information that in our first year, we had less than 80 students admitted. But I can tell you that we had cause to expel four of them.

“We may be young; but it does not mean we will accept every Dick and Harry as students. I think what we did was showing capacity to instil discipline.

“We have also had cause to sanction three members of staff. We are not happy to have sent them into the unemployment market.

“But we are saying that if you can not measure up with the standard we have set down, you certainly can’t be part of the vision of the founding fathers of this university,’’ he said.

The VC disclosed that at its inception in 2016, the National Universities Commission (NUC) only approved two faculties, namely the Arts and Social Sciences and the Sciences, respectively, to offer courses such as English, Mass Communication, Biochemistry, Mathematics, Microbiology and Computer science.

He said that the NUC later approved for the university, three additional faculties namely Law, College of Medicine and Engineering, but added that “we will only admit students into the Law department this new session.’’

Edo University, Iyamho, is a state government-owned tertiary institution founded in 2016. It is located in Iyamho, a town in Etsako-West local government area of Edo State.

On March 23, 2016, the university was approved by the NUC as Nigeria’s 41st state university. It offers undergraduate, postgraduate and research programmes.

On March 27, 2014, the Edo State House of Assembly passed a bill for the establishment of a University of Science and Technology at Uzairue.

The University was, however, changed to Edo University and its location to Iyamho.