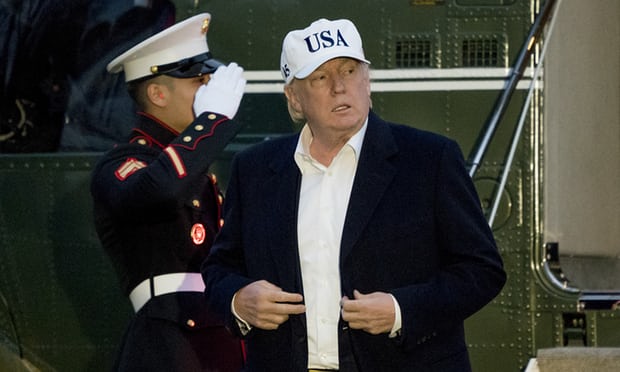 Donald Trump said on Sunday he was not planning to fire Robert Mueller, the special counsel investigating alleged collusion between Trump aides and Russia during the 2016 election.

Speaking to reporters on his arrival back at the White House from Camp David, the president was asked if he intended to take a step that many observers have anticipated and one Democratic congresswoman said could come as soon as Friday.

Trump also repeated his contention that there was “no collusion whatsoever” between his aides and Russia.

Earlier in the day, amidst fevered speculation on the issue, senior administration officials criticised Mueller’s work.

Director of legislative affairs Marc Short told NBC there was “no conversation whatsoever in the White House” about firing Mueller and said “the reality is that this administration has complied in every possible way with the special counsel”.

But he added: “Taxpayers have spent millions and millions of dollars on this investigation and it has not yet proven any sense of collusion with the Russians. I think the American people are ready to turn the page.”

Steven Mnuchin, the treasury secretary, told CNN Mueller’s work had become “a giant distraction” that “should be over quickly”.

Short and Mnuchin were speaking after Axios reported on Saturday that Mueller has gained access to thousands of emails sent and received by 13 senior Trump aides before and during the presidential transition.

Citing “people familiar with the transition organisation”, the Associated Press said the emails were transferred to Mueller’s team in September, a move of which the Trump team was not aware.

On Saturday, an attorney for Trump’s transition team sent a letter to two Republican committee chairmen in Congress, claiming the emails were provided to Mueller improperly.

Mueller was prompted to release a rare statement to the press, in which spokesman Peter Carr said: “When we have obtained emails in the course of our ongoing criminal investigation, we have secured either the account owner’s consent or appropriate criminal process.”

At the White House on Sunday evening, Trump was asked if he believed the emails had been “improperly taken”. He said: “Not looking good. It’s not looking good. It’s quite sad to see that. My people are very upset about it. I can’t imagine there’s anything on ’em, frankly, because as we said, there’s no collusion. There’s no collusion whatsoever. A lot of lawyers thought that was pretty sad.”

Analysts said however that the letter from the Trump transition lawyer was a political move rather than a sound legal gambit. A spokesman for the government agency which provided the emails to Mueller told BuzzFeed “no expectation of privacy” could be assumed.

In a statement on Sunday, Elijah Cummings of Maryland, the ranking Democrat on the House oversight committee, said the Presidential Transition Act “simply does not support withholding transition team emails from criminal investigators”.

Cummings added: “The president’s lawyers have said they want to fully comply with [Mueller] so it is odd that they now suggest they would have withheld key documents from federal investigators.”

Mueller was appointed in May, after Trump fired his successor as FBI director, James Comey. The special counsel has indicted four Trump aides, including former national security adviser Michael Flynn and former campaign chair Paul Manafort, and is generally thought to be closing in on the president’s inner circle. Speculation over Trump’s next move is rife.

So far, other than issuing characteristic attacks on Twitter, the president has fought something of a proxy war. After it was reported this month that Mueller removed from his team an FBI agent who sent text messages critical of Trump, Republicans in Congress, White House staffers and supportive Fox News hosts have amped up accusations of bias in Mueller’s team and the FBI.

News about the transition emails added fuel to that fire. On Sunday, former Trump campaign aide Michael Caputo called the investigation an “attack on the presidency” and told CNN there are “more and more indications that the Mueller investigation is off the rails”.

The California congresswoman Jackie Speier, meanwhile, told TV station KQED News: “The rumor on [Capitol] Hill when I left yesterday was that the president was going to make a significant speech at the end of next week. And on [Friday], when we are out of DC, he was going to fire Robert Mueller.”

Another key element of the Mueller investigation is whether Trump has attempted to obstruct justice, whether by firing Comey or, according to Comey’s testimony, seeking to have investigations of Flynn dropped when he knew his adviser had lied to the FBI. Flynn has pleaded guilty to that offence.

Among respondents to the AP poll, 63% thought that Trump did attempt to obstruct the Mueller investigation.