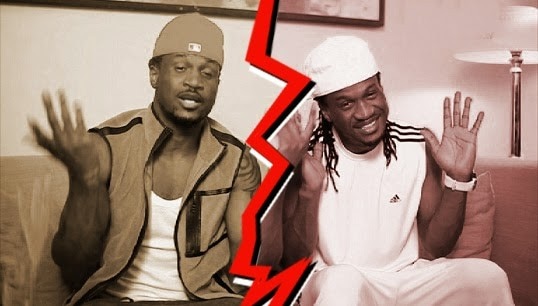 A lot went down in 2017, sibling rivalry, bleaching cream beef, royalty beef, alleged robbery and premature deaths among other things.

To round up the year, Pulse brings to you the top 10 controversial moments in Nigerian pop culture in no particular order.

Bobrisky is a master at stretching the proverbial 15 minutes of fame to last a lifetime. In 2017 he stayed in the thick of the news. The highlight of his year was when he got arrested. Bobrisky soon became a trending topic when pictures of him in police custody got shared online. Blogs, sites and advocacy groups went up in arms for release. When he was eventually freed, it was revealed that his time in custody was because of a rivalry between him and fashionista Toyin Lawani.

2) Daddy Freeze vs Pastors on tithing

Daddy Freeze was a huge pain for many Pentecostal pastors in Nigeria. The controversial OAP in various Instagram posts insinuated that Nigerian pastors feed fat of the tithes of its members. His comments hit the wrong spot and Nigerian pastors came for him from their pulpits all year long.

The skin care company didn’t think much about its billboard until pop singer Fuse ODG bashed it for advertising ‘for visibly fairer skin. This created a storm online with many people criticizing the brand for encouraging dark skin women to lighten their skin. Nivea later apologized and took down the billboard in Accra, Ghana.

4) Mr Eazi and his ‘Ghana’ comments

Another Ghana controversy came from Mr Eazi when he made comments about Ghanaian music greatly influencing Nigerian music. Many Nigerians did not appreciate this comment and immediately schooled the singer on the history of Nigerian music. Mr Eazi did not learn from his mistake. A few months later he slammed Nigerian musicians for stealing the Ghanaian sound that he made popular.

After a pretty long hiatus, Big Brother Naija came back on air and it gave us a lot of things to talk about. The biggest thing from the show was the incident between Kemen and Tboss. It became a talking point on social media for days and led to Kemen’s expulsion. Once again the issue of consent and sexual molestation was brought up.

6) Oba of Lagos and Ooni of Ife beef

It’s not every day you see two top monarchs beefing but in 2017 we did. At a public event, the Ooni of Ife stretched his hand to shake the Oba of Lagos. The Lagos monarch rejected the gesture. The video of the snub went viral and sparked a conversation about the rank of royal rulers in Nigeria.

Always the celebrity with the heart of gold, 2face Idibia planned a nationwide protest in February 2017. Although he had good intentions, 2face’s relationship with politicians in the past was called to question. This sparked a lot of controversies online and at the end of the day, 2face Idibia had to pull out of the protests.

This one had been coming for a while. In 2017, Psquare did finally break up and Peter and Paul Okoye went their separate ways. It wasn’t a clean split though as a lot of drama was involved. The usual Instagram posts laced with shade as well as a disappointing video signalled the end of one of the biggest music groups out of Africa.

Burna Boy hardly goes without a controversy each year. In November, the Nigeria police claimed the singer was the mastermind behind the attack of Mr 2Kay at Eko Hotel & Suites. It was a shocking revelation. Burna Boy has always been controversial but this was a new brand of controversy. He was declared wanted by the police, an invitation he is yet to honour.

10) Davido and the death of Tagbo/DJ Olu

Davido had a good year but he had a few controversies as well. The death of his two friends within the space of one week raised a lot of eyebrows. Davido was called up by the police to explain the mysterious death of his friend Tagbo. At the end of the day, the autopsy revealed that Tagbo had taken an excessive amount of alcohol. DJ Olu and his friend both died in his car and the police announced that an unidentified substance suspected to be drugs was found in the car. The death of Davido’s friends highlighted the growing substance abuse problem in the country.

“I Made People Laugh, But Hated Myself And Was Suicidal” – Lepacious Bose recounts