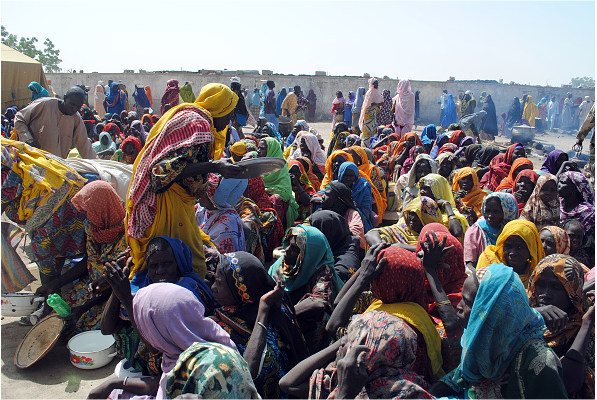 It’s a highly devastating experience, fleeing a bad situation and believing that you have found safety, only to meet the same ordeal at the hands of your supposed saviors.

But that is the reality of several girls fleeing from Boko Haram, according to a report by Dionney Searcey for the New York Times.

14-year old Falmata, 18-year-old Hadiza, an unnamed 13-year old; they all have the same stories – they fled from capture and sexual assault at the hands of Islamic sect Boko Haram, only to meet the same at the hands of the security forces in charge of the IDP camps.

Falmata was 11 when she was kidnapped by Boko Haram militants.

3 different militants, she was married off to, before she finally got pregnant with the baby dying a few days after he was born.

She escaped one night, 3 years later,  while the entire camp was asleep, and was rescued by soldiers who took her to an IDP camp called Dalori Camp, outside Maiduguri.

The same night she arrived at the camp, she was raped by one of the security officers who called her into his quarters.

Just hours later, resting in her tent after the abuse, another security officer arrived, and he too raped her.

The same day I was brought there, soldiers started coming to rape me. They did it one after another. I’m not even sure those two knew about each other.

She spent two months at the camp, she said, before she couldn’t take it anymore.

“I felt it would continue forever,” she said.

Again, she fled, just the way she had escaped the Boko Haram camp, no money, no anything.

She met a man on the road, told him: “Look, I have a problem. These people are going to kill me. They come to me every night.”

With his help, she located her grandmother, and it’s with her she’s been living since.

Hadiza, although in another camp called Teachers Village, had a similar story.

The security officers had a system to select their victims: They’d select a girl to cook their meal, asked that she clean up afterward, then tell her to go bathe in the officers’ quarters while they watched.

Hadiza told New York Times she was called in one day to cook and she thought “Definitely my time has come.”

That night she was raped, she said, and has since then been raped over 20 times.

Very little progress has been made by Nigerian authorities to implement President Buhari’s promise of justice for the survivors.

The delay reinforces displaced people’s sense of helplessness, and likely emboldens more perpetrators to prey on their vulnerability.

How To Convert Grams To Moles – Example Problem