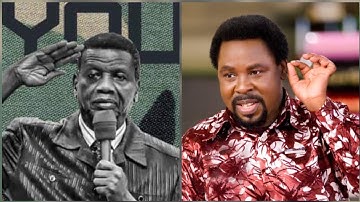 The compassionate letter was dated 15th June, 2021 and it was not made known to the media until it leaked out.

Pastor Adeboye had been a strong antagonist of Joshua and he even said some years ago that he would bot preach in Joshua’s church unless the prophet would allow him to preach salvation message to him to become born again before he could minister in his church.

Several top Christian leaders did not condole with Joshua except a few of them.

In the letter addressed to Evelyn Joshua, Adeboye said he joined millions of people worldwide to register the church’s condolence with her on the passing of her husband.

He said he believed he would meet Joshua at the feet of the Lord Jesus on the resurrection morning.

The letter reads in full:

“Calvary greetings in Jesus name. We want to join millions of people across the globe to register our condolence with you on the passing of your husband, Pastor T.B. Joshua.

“We take solace in the Lord, believing that we shall meet again at the feet of the Lord Jesus on the resurrection morning.

“We therefore, pray for you, your children and the entire church that, the Lord will uphold all of you and such untimely death shall cease in our midst in Jesus mighty name.

Be assured of our continuous prayers. Yours in Him. Pastor E.A. Adeboye, General Overseer.”

Recall that TB Joshua was buried in Lagos after a week of funeral rites. Thousands of mourners attended the burial service at his Synagogue, Church of All Nations (SCOAN) in the Ikotun area of Lagos.

Who is Obi Cubana? 20 things you should know about him [PHOTOS]