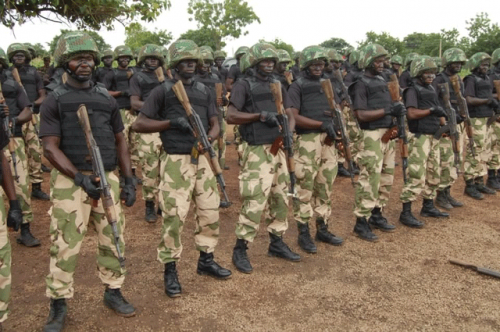 The Nigerian Army has called on people in the north-east to be vigilant to guard against suicide bomb attack by Boko Haram insurgents during this yuletide season.

Nwachukwu said that it was imperative for the people to be vigilant and monitor suspicious persons in their communities, places of worship and other public places during the festive season.

He said that the insurgents were taking advantage of the relaxed vigilance and security measures in the society to attack soft targets.

“Additionally, an assessment of recent trend of Boko Haram insurgents Improvised Explosive Device (IEDs) campaign indicated a deliberate targeting of places of worships as witnessed in the disheartening incident of the suicide bombings.

“One of the reasons adduced for easy infiltration by suicide bombers is the absence of measures to scrutinize and identify persons accessing these facilities.

“Most places of worship have been found to exhibit similar deficiency and have lowered their guards, thereby exposing themselves to preventable attacks”.

Nwachukwu noted that with the yuletide around the corner people should be more vigilant and devise security checks in their respective places of worship and social gatherings.

He called on community and religious leaders to sensitize and mobilize their people to be security conscious to prevent insurgents’ attack.

Nwachukwu disclosed the troops had sustained onslaught against the Boko Haram insurgents in the ongoing clearance operations at the fringes of northern Borno.

He added that several insurgents were killed, hundreds of the terrorists captured while many others voluntarily surrendered.

“Some of the insurgents, however, escaped with gunshot wounds and might be seeking help and treatment in any available health facility.

“Unsuspecting persons have inadvertently provided such fleeing insurgents with support without recourse to the security agencies,” Nwachukwu said