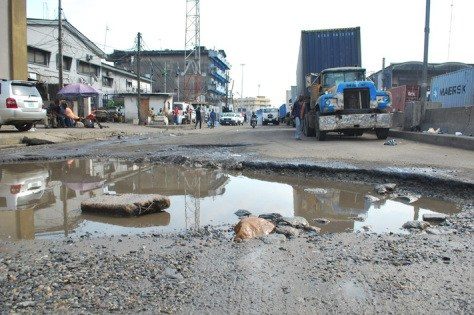 The Apapa-Wharf Road reconstruction in Lagos State has achieved only 10 per cent completion, an official of the Federal Ministry of Power, Works and Housing (FMPWH), has said.

Mrs Olukorede Keisha, an FMPWH engineer supervising the project, said on Tuesday at the project site that presence of gas pipes and other public utilities in the road’s Right of Way (RoW) delayed the project execution.

The engineer spoke in an interview with the News Agency of Nigeria (NAN).

She said that the contractors handling the project had, however, resolved the problem.

Keisha said that 200 metres of concrete road and 230 metres of drains had been constructed on section one of the project.

“The project is about 10 per cent completed; we finished 230 metres of drain and 200 metres of concrete road on section one.

“We have about four layers of road to make the pavement rigid; the road thickness is 600mm,’’ she said.

She said that the project had four sections.

Keisha told NAN that a design alteration was done to take care of the gas pipelines in the RoW of the road so as to meet the completion date of June 2018.

“There is no need to relocate the pipelines again; the pipes are encased. We had to redesign in order to safeguard the pipes for work to continue.

“It is a shift in alignment, we shifted it forward,’’ she said.

She said that the redesign gave the opportunity for deep excavation to lay a solid foundation for a durable concrete road.

On potholes on some portions of the highway, Keisha said that rehabilitation work had begun on the bad portions.

According to Keisha, the ministry will use the Christmas holiday to take care of the most critical portions on the reconstruction zone and other roads in Apapa.

Some rolling machines were being used to compact construction materials on about 500 metres stretch of the road on the Ijora/CMS Carriageway.

The machines were compacting soil-based materials to connect to a concrete section of the road.

Meanwhile, some of the road users have appealed for speedy completion of the project.

A food vendor, Mrs Kaka Kolo, appealed to the Federal Government to increase funding for road repair in Apapa.

“Trailers are the ones spoiling the road always. The best thing is for government to give contractors more money to repair roads.

“Government should not wait for potholes to get big and trailers start falling before it does something,’’ she said.

Also, Mallam Awal Usman, a truck driver, called for repair of all bad roads on the axis.

He urged collaboration of all government agencies to end gridlock in Apapa.

Another truck driver, Mr Odu Nwoye, told NAN that the efforts of traffic managers had reduced accidents caused by bad roads and reckless driving on the axis.

The Minister of Power, Works and Housing, Mr Babatunde Fashola, on June 17 signed a N4.34 billion Memorandum of Understanding (MoU) with AG Dangote Construction Company Ltd. and some other stakeholders for the reconstruction of the four-kilometre Apapa-Wharf Road.

The project is being funded by AG Dangote Construction Company Ltd, the Nigerian Ports Authority (NPA) and Flour Mills of Nigeria.

Related Topics:Apapa-Wharf Road
Up Next

Osborngate: Buhari Vows To Sanction All Those Found Culpable

SGF Mustapha Calls For Synergy Among Tiers Of Government