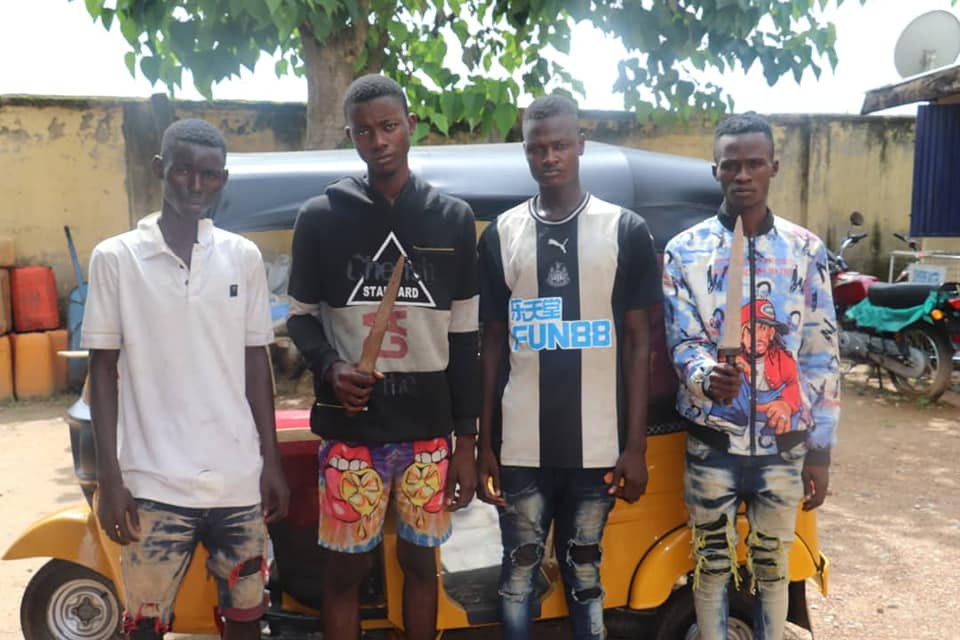 Spokesperson of the command, DSP Wasiu Abiodun, who disclosed this in a statement on Saturday, August 28, in Minna, said police officers rescued one of the suspects from an angry mob in Suleja.

The suspects were arrested at Farm-centre area of Chanchaga LGA while robbing a female victim with two knives in a tricycle.

“The victim attempted to board a tricycle (keke-napep) from Tunga to Chanchaga, while the suspects who disguised themselves as passengers in the tricycle with Reg. no. MNA 455 VM suddenly alighted with two knives, attacked and robbed the victim of her purse containing about fifty-five thousand naira and her infinix hot 5 handset valued about forty-one thousand naira.” the PPRO stated.

“The said victim immediately raised alarm which alerted the police patrol team, while the hoodlums quickly zoomed off in their tricycle after robbing her, but after a hot chase by the patrol team, the suspects were apprehended

Similarly, on 23/08/2021 at about 2130hrs, acting on a credible information, Police operatives attached to ‘A’ Division Suleja arrested two suspects, Abdul Yahaya, 29, Mustapha Abubakar, 28, both of Sabo Angwan-Kwamba, Suleja.

The spokesman said Abdul was arrested at an estate in Kwamba, Suleja where he attempted to snatch a handset from a victim and alarm was raised which attracted mob action. The Police patrol team quickly mobilized to the scene, rescued and arrested him from the mob who had inflicted injury on the suspect.

Other items recovered are: two Atm cards, one hammer, one stick, one motorcycle key, two black trousers and a black t-shirt, one black face cap, and four wraps of dried leaves suspected to be Indian hemp.

“Mustapha was later arrested when he attempted to evacuate some exhibits from one Hamza Hussaini residence who is also a member of the robbery gang, but presently at large. The suspects were equally reported to have robbed some victims at Gabodna market and made away with three mobile phones, one Atm card, and a sum amount of money,” DSP Wasiu said.

Effort is ongoing to apprehend the said Hamza while the two suspects arrested will be prosecuted immediately the investigation is concluded, he added.

Meanwhile, the State Commissioner of Police, CP Monday Bala Kuryas, has urged members of the public to continue to support the police with adequate information for a better and more secured environment.

Related Topics:Niger State Police
Up Next

Why we treat the rich and poor differently – Kano Hisbah