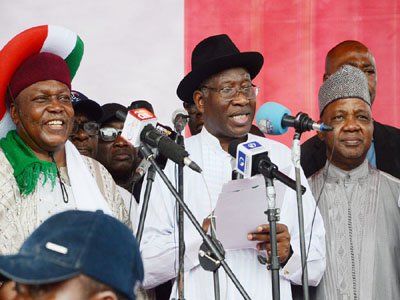 THE Peoples Democratic Party (PDP) leaders are considering options on how to pacify the Southwest geopolitical zone, following protest from its leaders.

The zone failed to realise its bid to produce the national chairman for the first time since the party was formed in 1998 as a result of the opposition from the party’s governors.

It was learnt that the PDP governors hijacked the party’s structure to have a say in the 2019 presidential plans of the party, secure second term tickets for eight of the party’s 11 governors and for the remaining three to be able to anoint their successors.

In a bid to rally support for National Chairman Prince Uche Secondus, ex-President Goodluck Jonathan has reached out to aggrieved PDP members.

The former President urged PDP leaders and members to give the Secondus team “benefit of the doubt”.

Secondus himself initiated reconciliation with PDP leaders in the Southwest, meeting yesterday with a former Deputy National Chairman, Chief Olabode George, in Abuja.

Investigation by The Nation showed that top leaders of the party, especially the founding fathers, were disturbed by the sidelining of the Southwest in the scheme of things.

The leaders were worried that the number of registered voters in Lagos alone is about 5.8 million, which is more than the figures of Bayelsa, Ekiti, Cross Rivers, Gombe and Ebonyi put together.

It was learnt that while the leaders of PDP might have come to terms with the reality of the emergence of Secondus, they said the party must assuage the “genuine feelings of the Southwest.”.

According to party sources, the PDP options for the Southwest are as follows: engagement and reconciliation; inclusion of more Southwest leaders in party’s key decisions; likelihood of appointment of Senate President or Secretary to the Government of the Federation from the zone, if PDP wins the next presidential race; and juicy appointments after 2019 poll

A member of the Board of Trustees, who spoke in confidence, said: “The PDP chairman on Monday held a reconciliatory meeting with Chief George. We are hopeful that the healing process will yield fruits.”

National Publicity Secretary Ologbodiyan said: “There are efforts to begin a proper reconciliation in the Southwest and with some of our leaders. We believe it is not in the interest of all of us to allow the party to be killed.”

A strong stalwart of PDP, who spoke with The Nation in confidence, said: “The governors took over the party structure because they have been funding it all along with their huge resources. So, they believe ‘he who pays the piper dictates the tune’.

“Some of the governors were emphatic that they cannot entrust their future in the hands of some candidates from the Southwest, who might succumb to pressure from the bigwigs in PDP at any critical moment. They rated Secondus as a very strong character.

“A few others claimed that they were being patriotic by backing Secondus, who can restructure, reunite and make the party stronger to win more states than what the old generation of PDP leaders turned it into.

“But it was discernible to all that the governors are actually targeting 2019 presidential primaries in PDP. They are determined to have much say on who will secure the ticket of the party. Some of them are already working for some aspirants in PDP and the ruling All Progressives Congress (APC).”

During his visit to Prof. Sulaiman, Jonathan arrived at the ex-minister’s home in Abuja at about 1.10pm and left after a 50-minute stay.

Those on his entourage included a former Minister of Special Duties Mallam Tanimu Turaki and some party leaders.

Jonathan pleaded with Suleiman and other leaders of the party, who felt offended by the results of the elective convention, to forgive and forget.

He said: “We should give the new executives of PDP some benefit of the doubt and see how things work out. If we fail to support them, we are not helping the party.”

He told Suleiman: “I thank you for your doggedness and passion for PDP

“You did well and members of our party know you are the best among the competitors. Put the events of Saturday night behind you and move on. Accept the outcome of the election as the wish of God.

“You should not allow yourself to be stampeded into any untoward action. I know better things await you. We cannot afford to lose you.”

Suleiman, who praised the ex-President for his solidarity visit, said nobody or group could intimidate others out of PDP.

He said: “I thank you for your compassionate posture. You are a consummate leader worthy of emulation. Your visit has inspired me more on my commitment to PDP.

“I promise to I will take to your advice. The party is ours and nobody or group of people cannot intimidate us out of the party. I thank you and other members of your entourage for the confidence reposed in me.”