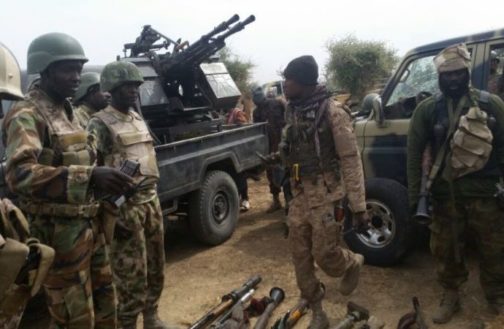 Nigerian troops on Monday repelled an attack by suspected Boko Haram insurgents at a security check point few kilometres away from Maiduguri.

The incident occurred at about 5.30 PM, at Moloi area, on outskirts of Maiduguri.

The insurgents were said to have torched some houses and vandalized vehicles on Maiduguri-Damboa-Biu Road.

An eye witness, Aji Maina, said that the insurgents attacked and shot sporadically, a situation which made the villagers to scamper for safety and fled their homes.

Maina said that the residents of Moloi and adjourning villages had to run into Polo and other areas of Maiduguri for safety.

He, however, said that soldiers deployed to the area engaged the insurgents and repelled the attack.

“The insurgents attacked the ED security section, torched houses and motorists caught in the cross fire.

“At present, no one can ascertain the extent of damages or casualties in the attack.

“Many people fled their homes and scampered for safety into Maiduguri,” he said.

Security had been beefed up in the metropolis to thwart any breach of peace while people were going about their normal activities.

The Police and military authorities are yet to comment on the incident.

Related Topics:NIGERIAN SOLDIERS
Up Next