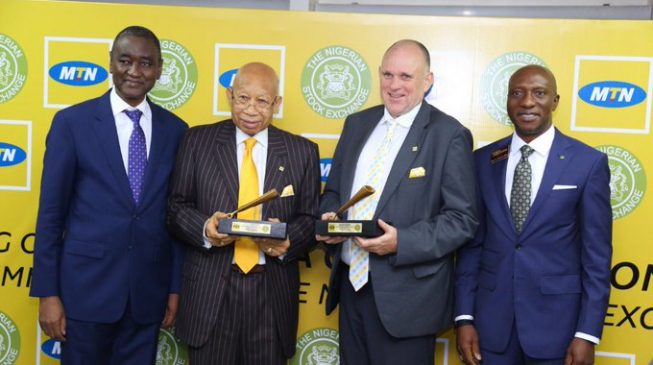 With this, the company joins ongoing efforts to accelerate the Central Bank of Nigeria’s drive for financial inclusion.

“We are fortunate to be part of the telecoms industry which underpins the digital economy and is critical to inclusive development and the future economic growth of this great nation. The launch of the YDFS MoMo Agent is especially significant to us,” Ferdi Moolman, the Chief Executive Officer of MTN Nigeria said.

Majorly owned by South Africa’s MTN Group, MTN Nigeria was awarded a licence by Nigeria’s central bank in July that would allow the telecoms firm to provide financial services.

Usoro Usoro, Y’ello Digital Financial Services (YDFS) Director, told BusinessDay in a phone response on Thursday that the MoMo Agent will bring financial services to the door step of their customers.

“In a nutshell, the MoMo Agent is bringing banking to neighborhoods, taking away transportation cost, providing a safe, fast and efficient means of sending and receiving money,” Usoro said.

According to the director, some of the services the telecommunication company will be able to provide through the MoMo Agent include: money transfer, purchase of data, airtime and payment of bills.

Meanwhile, MTN Nigeria is among the list of applicants awaiting the Payment Service Bank (PSB) licence from the central bank.

In his comment, Usoro said the time frame on when the licence will be issued can only be “determined by the apex bank,” adding that MTN Nigeria “is hopeful that it will be issued in no due time.”

On the 5th of October 2018, the central bank released exposure draft guideline in which it proposed Payment Service Banks aimed at deepening access to financial products and services in a country that is lagging its African peers in inclusion rate.

According to the lender, subsidiaries of mobile network operators (Telcos), mobile money operators, retail chains (supermarkets) and banking agents are welcome to apply for the PSB license, provided they can meet certain requirements of the CBN.

Nigeria’s bank-led financial inclusion model has been argued by industry players as one of the reasons for the lag in the country’s inclusion rate.

No wonder the proposed PSB has been seen as a welcomed development considering it will avail other businesses, especially the Telcos opportunity to partake in providing financial services.

As at December 2018, 36.8 percent of Nigerian adult populations were reported to be excluded from the financial services net. This translates to 36.6 million people who at the time were not in the financial cycle.

However, the central bank plans to drive the exclusion rate to 20 percent by the year 2020. Less than 5 months to the deadline, the regulator has about 16.8 percent gap to close if it is going to achieve its target.

As at the time Nigeria was considering the optimal approach needed to leverage new, innovative technology to deliver financial services to its people, the Central Bank analysed in some detail how to structure the guidelines and the regulatory environment to deliver the benefits on offer, without compromising the integrity of the financial system.

Africa’s largest economy needed to see how the regulation of mobile money could evolve owning to significant volumes of currency that could be circulating in mobile wallets, and may not be visible to the regulatory authorities.

As such it was clear that a better balance between the market and the regulatory structures was required.

Since then there has been an explosion in mobile money wallet usage in Kenya and other Africa peers, the Nigeria’s CBN was rather focused on an independent bank led model that would supplement and support the existing banking system.

“When loans and credits are given to individuals who have basic bank accounts especially those in the informal sector, (as they contribute to the larger population of the country), they will be encouraged to operate formally in the financial circle other than their normal traditional way of carrying out financial transactions,” Wale Okunrinboye, head of Research at Lagos-based Sigma Pensions said.

At least 30 business names have since applied for registration to obtain the payment service bank licence but since October last year, the regulator has not issued any of the applicants the ticket to provide financial services.