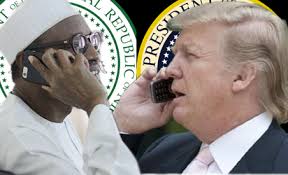 US President Donald Trump has tongue lashed countries with immigrants in the US, according to a New York Times report.

In a meeting he reportedly attended in June at the Oval Office, Trump was quoted to have said Nigerians refuse to “return to their huts” after seeing America.

He was also quoted to have said immigrants from Haiti “all have AIDS”, while describing Afghanistan as a “haven of terrorists.”

Trump was said to be angered by the rising number of immigrants in the US despite his travel bans.

He described this as a mockery to his campaign pledge.

Earlier in the year, he had issued an executive order banning travellers from six Muslim-majority countries from gaining access to the US.

“More than 2,500 were from Afghanistan, a terrorist haven, the president complained,” officials in the meeting reportedly told New York Times.

“Forty thousand had come from Nigeria, Mr. Trump added. Once they had seen the United States, they would never ‘go back to their huts’ in Africa.”

The White House is said to have confirmed the meeting. It, however, denied that Trump used the words “AIDS” or “huts” in referring to people from any country.

‘After my release, kidnappers called to ask about my health’ Ehanire recounts