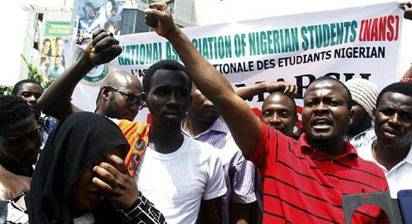 The striking actions enforced by the Academic Staff Union of Universities is an industrial action meant to get the Federal Government’s attention towards the failing academic situations of Nigerian Universities, but the National Association of Nigeria Students think otherwise.

In reaction to this line of thought, the members of the National Association of Nigeria Students (NANS), had a protest yesterday to urge on the Federal Government to put a stop to the salaries and allowances being paid to striking lecturers.

The group also advocated the government to stop elected and appointed officials of the ASUU union from sending their children abroad for educational pursuits.

The students, in their protest against the striking ASUU, barricaded the Benin-Asaba-Onitsha expressway armed with placards as they stormed the Koka Junction in Asaba, Delta State, at 7.00 in the early mornings as they forced a gridlock for several hours.

Oghale Emeka Rex, the NANS Deputy Coordinator in the South South and South East, speaking on behalf of the protesters, said the decision to cripple the nation was taken two weeks ago in Sokoto.

“This is a marathon protest to block all federal roads as a test run of what will come up in the coming days.” He said.

Rex said the action had been delayed in a bid to lobby governors in the South South region to plead on the Federal Government to accede to ASUU demands.

He, however, added that they were ignored by the governors, hence the resort to the protest.

“Henceforth, students would be coming with their stove, and foodstuff to cook on this road. We are coming out with our sleeping mats to occupy the road.

“And then, we will move to the federal secretariat in Asaba to grind activities so that everybody will be at home,” he said.