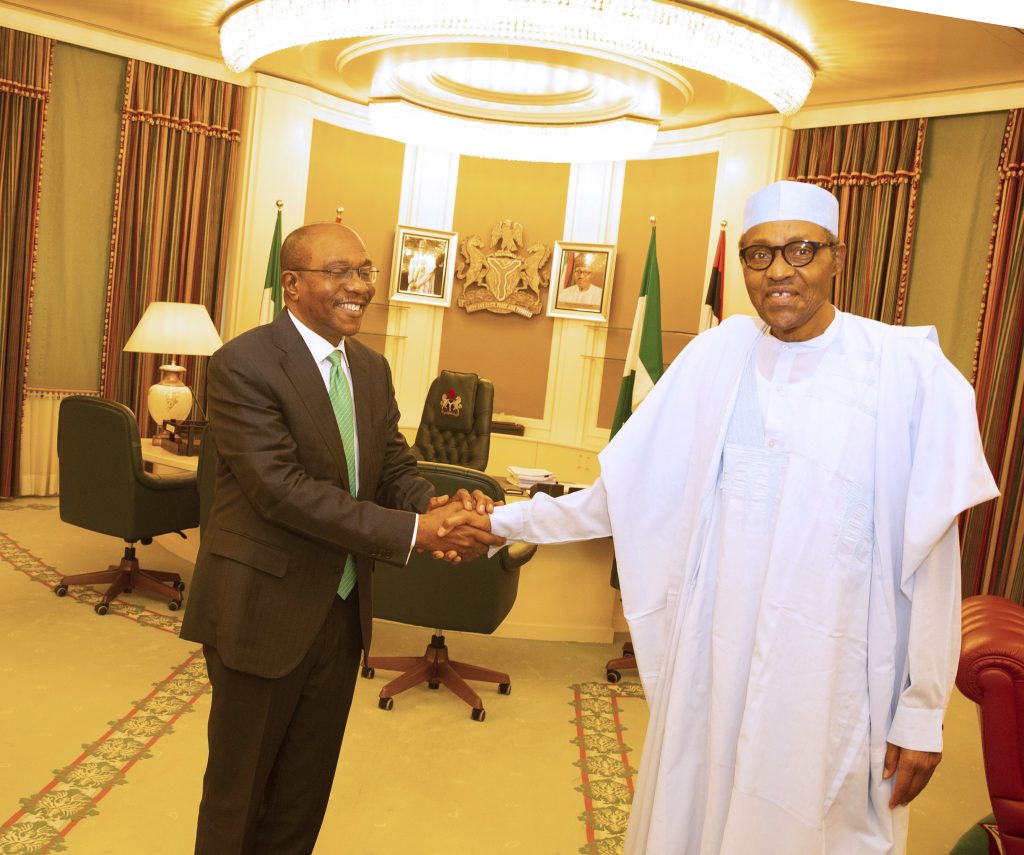 On Thursday, President Muhammadu Buhari, directed the Governor of the Central Bank of Nigeria, Godwin Emefiele, not to release money for food and fertilizer importation henceforth.

The Senior Special Assistant to the President on Media and Publicity, Garba, Shehu, who disclosed this in a statement titled, “Don’t give a kobo for food, fertilizers imports, President Buhari directs CBN,” said Buhari stated that firms that were bent on importing food should source their foreign exchange elsewhere.

Shehu said Buhari gave the directive at a meeting of the National Food Security Council at the Presidential Villa, Abuja. But the Manufacturers Association of Nigeria, in its reaction, warned that the directive could cause further inflation, saying the country was not sufficient in food production.

In a circular in 2015, the Central Bank of Nigeria listed 41 goods and services as items not valid for foreign exchange in the Nigerian foreign exchange market, and had gradually increased the number to 44.

On Thursday, Shehu quoted Buhari as restating his earlier verbal directive to the apex bank, saying he would pass it down in writing that ‘’nobody importing food should be given money.’’

The statement quoted Buhari as saying, ‘’From only three operating in the country, we have 33 fertilizer blending plants now working.

“We will not pay a kobo of our foreign reserves to import fertilizer. We will empower local producers.’’

Shehu said Buhari also directed that blenders of fertilizer should convey products directly to state governments so as to skip the cartel of transporters undermining the efforts to successfully deliver the products to users at reasonable costs.

The President, he said, advised private businesses bent on food importation to source their foreign exchange independently, saying, “use your money to compete with our farmers’’, instead of using foreign reserves to bring in compromised food items to divest the efforts of our farmers.

“We have a lot of able-bodied young people willing to work and agriculture is the answer. We have a lot to do to support our farmers,’’ Buhari added.

Shehu said the meeting, chaired by the President with other key members of the council in attendance, was briefed on the food security situation prevailing in the country.

Specifically on agriculture, he said the sector had continued to grow despite the impact of COVID-19 because of his regime’s targeted policies.

Buhari said this in a statement by his Special Adviser on Media and Publicity, Femi Adesina. The statement was titled “Despite COVID-19, we’ve been able to avert food crisis, says President Buhari.”

Adesina quoted the President as saying that the COVID-19 pandemic exposed the level of preparedness of nations to shocks of food security.

Shehu, in his statement, said the Minister of Finance, Budget and National Planning, Dr Zainab Ahmed, outlined measures introduced by the administration to tackle the unprecedented challenges from the COVID-19 pandemic on the nation as contained in the Nigerian Economic Sustainability Plan.

Among others, he said the minister highlighted that the government would facilitate the cultivation of 20,000 to 100,000 hectares of new farmland in every State and support off-take of agro-processing to create millions of direct and indirect job opportunities.

He said Ahmed also briefed the meeting on the joint investment with the World Bank to provide intervention fund to States to improve health infrastructure.

She said to ease existing financial hardships among the people, the government is also coming up with low-interest loans for mechanics, tailors, artisans, petty traders and other informal business operators.

The statement added, “The minister added that the Federal Government will equally provide support to Micro, Small and Medium Enterprises to help them keep their employees and boost local manufacturing.

“In his presentation, the Minister of Agriculture, Alhaji Sabo Nanono, told the council that the nation expected a bumper harvest of food items despite floods in the north and drought in the south.

“He quoted the latest market surveys to show that the recent hike in the price of commodities is being reversed.

“On his part, Mr Boss Mustapha, the Secretary to the Government of the Federation and Chairman of the Presidential Task Force on COVID-19, reported the negative impact of the pandemic on the lives and livelihood of citizens, while the Comptroller-General of Customs, Col Hameed Ali (retd.) expressed the hope of an early reopening of the partially closed borders given the progress made with neighbouring States in joint border patrols – one of the key conditions by Nigeria for reopening of the borders.”

Meanwhile, MAN and the Lagos Chamber of Commerce and Industry on Thursday reacted to the President’s directive on food importation.

The acting Director-General of MAN, Mr Ambrose Oruche, in an interview, said the country was not self-sufficient in food production and still needed forex to import some food.

Oruche said with the country not self-sufficient in food production there would be more inflation if was no forex to import food items such as sugar and flour.

He said, “You will see that the last inflation report that was released showed food inflation rate has gone up which shows there is no food sufficiency because what normally happens is if demand is more than the supply, the price of the product will go up.”

“I don’t know where they got the statistics that we are food sufficient because food is not even generic, it has a lot of components.

“We still need forex to import food and raw materials that will enable us to produce the finished goods that people can consume.”

Reacting to the presidential directive, the Director-General of the LCCI, Muda Yusuf, told one of our correspondents that the order was not new, but noted that the President should be more specific.

He said, “The word ‘Food’ is generic. There are processed food items. There are agricultural products that are intermediate products used by manufacturers as critical raw materials. There is a need to properly define what food means in the context of the directive in order to avoid discretionary interpretation.”

On his part, the Lagos Chapter Chairman, All Farmers Association of Nigeria, Otunba Femi Oke, supported the development but called for more financial help to farmers.

He said, “It is a very good development for the CBN not to release money to those importing food. This is because it will encourage us the local farmers to produce more to meet the demands at home.”

In its report on Selected Food Prices Watch released last month, the National Bureau of Statistics stated that the prices of some selected foods increased on a monthly basis.

How FG lawyer lied against me over Malabu in Italy – Adoke