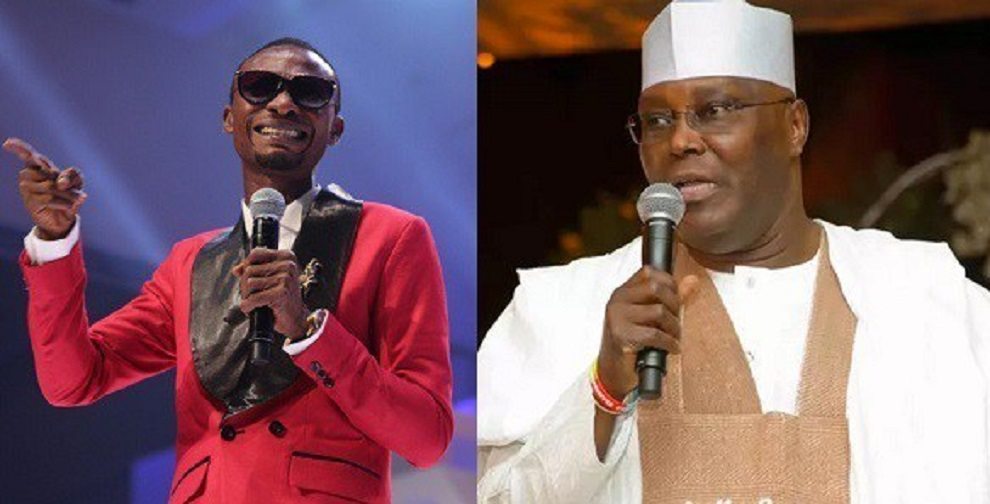 It is no longer news that former vice-president Atiku Abubakar has kicked-off his 2019 presidential campaign, and young Nigerians are his prime target audience.

His latest release is another testament to that.

Last week, Nigerian comedian Francis Agoda, better known as IGoDye had written a damning letter to the former vice-president, querying his days in office as the nation’s number two citizen.

Abubakar has penned a reply and invited IGoDye to join his team in convincing young people that a better Nigeria is possible with him at the helm.

Here are 10 things we learnt from Abubakar’s reply.

“As VP, I assembled what is arguably the best Economic Team ever in Nigeria. It was made up of young, world-class professionals, who came home to work. Some of those professionals are now political leaders, governors and world leaders in their own right,” Abubakar claimed in his letter.

“If you ask what our first task was, coming into government in 1999, it was to bring stability to the economy after decades of military rule.

“For example, between 1999 and 2003, oil prices then were hovering between $16 and $28 yet we managed to pay up salary arrears from decades back, clear up our national debts and built up foreign reserves. Our GDP grew at the fastest rate we’ve seen since the return to democracy.”

OSINBAJO NOT TO BLAME FOR BUHARI’S FAILURE

He added that Vice-President Yemi Osinbajo cannot be held responsible for the “failure” of Buhari’s government, adding that “VPs only do what they are allowed to do”.

“Firstly, as VP, I can only be judged on the responsibilities I was given. A VP obviously is not the driver of government. For example, you can’t blame Prof Osinbajo for all that is going on with the current government. He can only do what he’s allowed to do.”

Abubakar said he was “largely frozen out in the second term” of the Obasanjo-Atiku tenure, claiming that Obasanjo wanted presidential tenure elongated beyond 10 years, risking having a Mugabe in Nigeria.

“I regret that we had that disagreement with my boss. Some say I was disloyal, but I looked at the events in Zimbabwe recently, and it gives me confidence that I did the right thing fighting the attempts to elongate the presidential tenure beyond eight years.

“If I did not win that fight, do you think we would be having a discussion on young people getting into leadership today?”

HE ‘IS THE REASON’ IGODYE HAS A FLOURISHING CAREER

Abubakar adds that he oversaw the telecoms revolution in Nigeria, and he is the reason why young people like IGoDye have a great career — which leveraged on the power of telecommunications.

“I oversaw the telecoms revolution, which is why young people like you, I Go Dye, now have a flourishing career. Under our tenure, we witnessed a large repatriation of Nigerians back to Nigeria, driven by the hope of the recovering economy.

“It is sad that many of those young people are heading back abroad now — this is to show you that leadership matters.”

When last did you spend or see one naira?

Abubakar took a slight jab at the All Progressive Congress, who were reported by NAN in 2015, to have promised dramatic naira to dollar recovery.

He said: “I Go Dye, I’m not a messiah. I do not promise Eldorado or $1 = N1. But I always ask to look at the economic progress we made under my leadership and what I am doing in private business and judge me by those.

“People say I became rich in government. It’s a lie. I had hundreds of millions of dollars in assets declared in 1999.”

The former VP also claimed to have been the one who lured former World Bank managing director, Ngozi Okonjo-Iweala to come home and work for Nigeria.

“I went to the World Bank and met a bright lady, convinced her to come back home, and she became a star in our government. To show you we had effective leadership, the same lady could not replicate her exploits under a different government.”

ABUBAKAR ‘LARGEST EMPLOYER OF LABOUR IN ADAMAWA AFTER STATE GOVT’

He claimed to have created 300,000 jobs directly or indirectly in Adamawa, and that he is only second to the state government.

“In my home state of Adamawa for example, I’ve created over 50,000 direct jobs and 250,000 indirect ones. We are the largest private employers of labour in the state only second to the state government.

“It’s not a lot, but it does help reduce unemployment. Who do you think are holding those jobs? Yes, young people.”

He says his legacy as VP “is the banking consolidation process, for which I gave political backing for. Many big people were putting a lot of political pressure to not change the status quo, but we knew that if that consolidation was not done, Nigeria could not grow.

“Because of that banking consolidation, Nigerian banks don’t fail anymore the way they used to.”

Abubakar said he was in charge of the privatisation process, and many of the bidders were his friend, considering he was a wealthy man before he went into government.

“Did I use my influence to get them better deals? No. As the then DG of BPE testified under oath, I never used my position to interfere with his work,” Abubakar said, embedding a video where Nasir el-Rufai, now Kaduna governor swore to God that no one interfered in his work.

THERE’S A DIFFERENCE BETWEEN NAIJA AND NIGERIA

Davido, Wizkid are from Naija NOT Nigeria

We did not see this coming: there is a difference between Nigeria and Naija. Wizkid, Asa, IGoDye, Iwobi, belong to Naija, while failing leaders and Boko Haram belong to Nigeria.

“Naija embodies the hopes and dreams of young Nigerians, the country they love and long to go home to when they are abroad. Naija is the country that brings them pride in music, film, comedy, fashion, and technology. It is the country of Wiz Kid, Asa, David O, Tuface, the Olympic bobsled team, Iwobi and Don Jazzy Again.

“Nigeria on the other hand, is the country of their parents, the country where leaders are constantly failing them, of Boko Haram, of herdsmen violence, of recessions and joblessness. Our young people need us to make our country live up to the aspirations of Naija by fixing the problems associated with Nigeria,” Abubakar wrote.

Where does Abubakar want to be president? Nigeria or Naija?