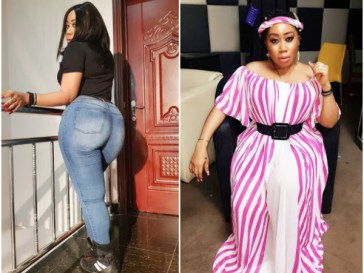 Nollywood actress, Moyo Lawal, who was in the news few days ago for posing nude in a brand campaign photoshoot, a report she debunked, is back again for body shamers.

According to Moyo Lawal who disclosed that someone tried bodyshaming her, she is the Commissioner of Short and fat Women, and won’t allow what people say get to her. She wrote on Instagram;

Someone tried to bodyshame me….????…. Me … Moyo Lawal?? Its like you want to be unfortunate , Emi ? Commissioner of Short and fat Women ?????#ML … P.s dont let anyone bodyshame you oooh , you are perfect the way you are , just please make sure you are healthy ….. If someone is perfect … Surgery has entered setting , so don’t allow anyone get to you ….. #ThatAfricanbarbie … #Nollywoodbombshell …. P.s the only thing that pains my heart is that them bodyshamers be looking like a ???????? … #CommissionerofImperfectlookingpeople??? .. #MoyoLawal … #soblessedandfiercelygrateful did I forget class captain of #Teampepperdem????? me I won’t block you oooh , frustration will make you go and save money for surgery ??

Born in Badagry (Lagos State, Nigeria), Moyo was a regular girl who attended Tomobid Primary School. She attended Lagos State Model College. When the time for the university came, she chose Theatre Arts where she successfully earned her bachelor degree. As we can see, later her education helped her a lot in life.

Even though she has the gift to act, her higher education institution shaped her professionally and as a person. Before developing her successful movie career and becoming popular all over Nigeria, she kept receiving small roles in low-budget productions. Her first acting fee was 5,000 naira per one episode. That was before her friend advised her to audition for a movie. Since then, Moyo started attending multiple movie auditions, and some of them proved to pay off.

Her television debut was in the series called “Shallow Waters”. In these series, she played a role of Chioma, and this role became her trampoline towards the successful acting career, as she started becoming noticeable for other famous movie producers.

Moyo Lawal was part of the cast of breakthrough Nollywood movies like “Big Gals on Campus”, “Cloud of Pain”, “Mistresses”, “Never Love a Prince”, “Thanks For Coming”, “Judas Game”, and many other prominent ones. She also acted alongside many famous actors like Iyabo Ojo, Biodun Okewo, Njoku, Halima Abubakar, Mary Remmy, and multiple others. One of her significant works is “Tinsel”, the soap opera where she played a role of Chinny. Apart from that, she appeared in the comedy series Jenifa’s Diary. Looks like whichever movie this woman is acting in, it is always a high-budget project with lots of first-class celebrities in it.

Related Topics:Moyo Lawal
Up Next