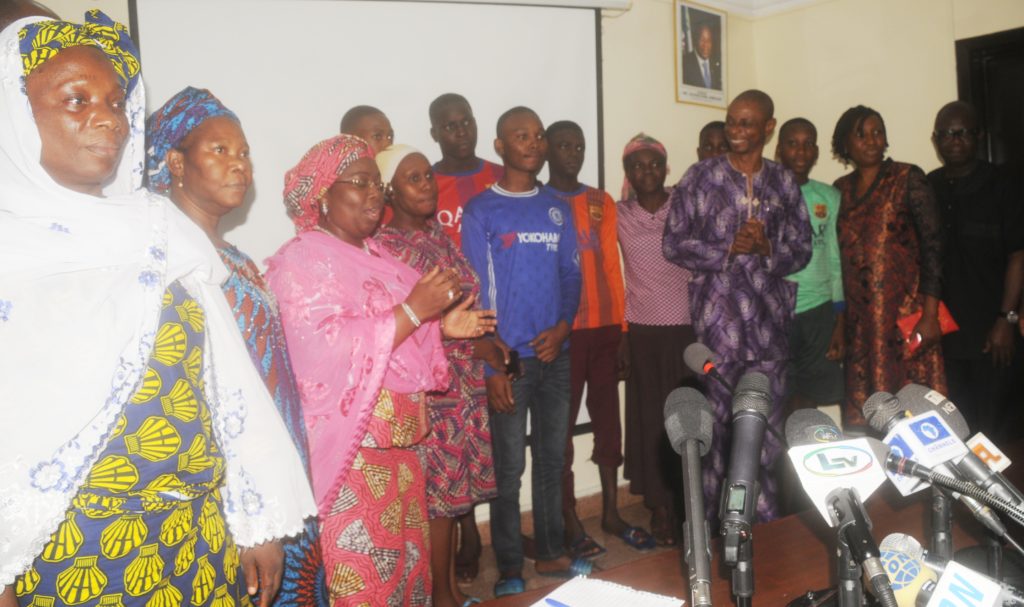 Exactly 65 days after the 6 students of Lagos State Model College, Igbonla, were abducted, they were reunited with their parents at the Lagos State Deputy Governor’s office in Alausa, Ikeja.

The Igbonla students were received on behalf of the Lagos State Governor Akinwunmi Ambode by his deputy Idiat Adebule, who said the state would intensify security in public schools this holiday period, in time for the resumption of students.

The Igbonla students, who are reported to have been dropped in Aboto Creek in Ilaje Local Government Area of Ondo State, were accompanied to Lagos by the Ondo State Governor Rotimi Akeredolu and his deputy Alfred Agboola.

The Igbonla pupils were said to have been expected earlier but were delayed by traffic on the Lagos-Ibadan Expressway.

According to Punch, the kidnappers collected an additional ransom of N5m before the release of the students, bringing the total ransom paid to N37m.

Twenty suspected kidnappers were also reported to have lost their lives in a gun duel.

A civilian JTF was also killed in the battle, with four others suffering various injuries.

Eight policemen were also said to be wounded, all receiving medical attention at the hospital.

Moruf Ramon, whose 19-year-old son, Isiaka, was among the rescued students thanked the Lagos State Government and the Nigerian Police for their efforts.

I am so happy with what is happening today and I want to appreciate the Lagos State Government and the Commissioner of Police for all they have done to secure the release of our children.

I have been the one talking with the kidnappers all the time and the police were always with us to get information that could help to facilitate the rescue operations.

We pray that this kind of incident will not occur again in Lagos State or even Nigeria as a whole.

Another parent, Beatrice Jonah, said it was a traumatic experience for her family. She said:

When I spoke to my son after the abduction, I was weeping because I was afraid for his life.

To me it has been 65 days of trauma but we thank God he is back safely.

A parent who spoke to Punch on the condition of anonymity said he celebrated the release with two bottles of beer.

“I am someone who likes fun, but I had to refrain from having fun since the children were abducted. But after I heard the news, I went to a hotel near my house and had a good delicacy with two bottles of beer. I am extremely happy,” he said.

It was unbelievable. I am very excited. Our sorrow is over. I have been receiving so many calls and congratulatory messages from people. We appreciate everybody that stood by us.

We commend the efforts of the Nigerian Police, particularly, the Lagos Command and other security agencies for their efforts in ensuring the safe return of these children.

We commend the Ondo State Governor and his deputy for their support and collaboration toward the rescue operation.

We appreciate the Acting President, Prof. Yemi Osinbajo, for his invaluable intervention in ensuring that we have these children brought back to us.

Now that the children are back, the government will commence a comprehensive checkup on these children — physically, mentally and psychologically. This is very necessary.

And in debriefing them, we will be involving other stakeholders, including their parents to ensure that it is effective.

We appreciate that 64 days was a long time to get these children back but it was in the interest of their safety.

As a government, we will continue to work diligently to ensure the security of lives and property in the state. It is a must for us to deliver on the issue of security.

As for security in our schools, we are working and putting all necessary measures in place before the resumption of schools for the next session.

Akeredolu thanked the Acting President Yemi Osinbajo for his involvement in the case. He said:

We must appreciate the role of the Acting President in this matter because he was the first person that contacted us in Ondo last month. Gov. Ambode was also in touch all the time.

We promised them that we will make efforts, but then we did not believe that these children could be in the creeks of Ondo.

My Deputy, however, waded into the matter because he is from the creeks.

In collaboration with the Delta Government, the Navy, Army and Marine Police, we did all that was humanly possible to secure the release of the students.

Ondo State has Zero tolerance for crime. You cannot use our creeks as safe haven for crimes anymore.

The Lagos State Commissioner of Police Fatai Owoseni also thanked the South-West governors for their support.

He said one of the kidnappers of the Igbonla boys had been arrested in Abeokuta, and the police hopes it will lead to the arrest of more of them.

This is one operation that will send fear to criminals as they will know that our governments in the South-West are committed to security and there will be no place for criminals in the region.

During the course of the operation, 20 of the kidnappers, including the leader of that kidnap, Bright Adeniyi, were killed when they ambushed the operatives of the marine police and civilian volunteers.

We lost a civilian volunteer, while four were wounded. Eight policemen were also injured and all these people are receiving medical treatment under the care of the state government.

So far, we have arrested one suspect who has been swindling the parents of the children.

He was arrested in Abeokuta when he asked the parents to drop some money. I’m sure others will be arrested soon and they will face the full wrath of the law.