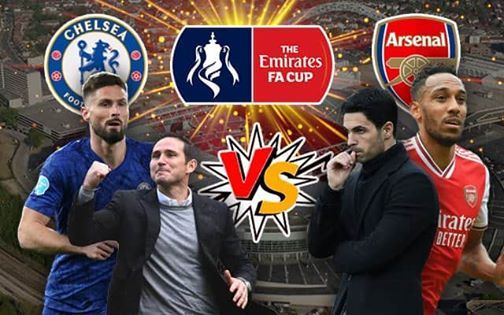 Arsenal and Chelsea will square off in this season’s Emirates FA Cup inside the Wembley Stadium on Saturday.

It is the second time in three years that the two London heavyweights will come face to face in the final of the world’s oldest Cup.

In 2017 final, Arsenal stopped Chelsea from completing a league and cup double following a 2-1 win.

While Arsenal is looking for a record 14th FA Cup title, for Chelsea they are hoping to make it their ninth title which they last won in 2018.

In their last two meetings in the final, Arsenal have emerged victors. In 2002 Arsenal triumphed 2-0 before repeating the feat in the 2017 final.

But in their recent meeting in a Cup final, Chelsea trounced Arsenal 4-1 in the 2018/2019 UEFA Europa League, denying the Gunners a place in this season’s Champions League.

For Arsenal, it is a must-win if they hope to be in Europe next season while Chelsea has already qualified for Europe’s biggest club competition.

It wasn’t the easiest of passage into the final as both Arsenal and Chelsea has to see off Manchester City and Manchester United respectively in the semi-final.

Speaking ahead of the final, Arsenal manager Mikel Arteta admitted it is very important for his team to win as it will provide them the chance to be in Europe.

“Yeah, it is. I wouldn’t like to talk too much or link these two factors but it is a reality that financially it would be really helpful. Obviously on the sporting side as well because to play in Europe for this club is a must and we have the opportunity to do both tomorrow.”

On how big it would be to win a trophy in his first season as manager at Arsenal, Arteta said:” Well, it generates the trust when you win a title. It generates moments when together you go through good emotions and in the end it brings everybody together and you have good memories.

“It’s about winning and winning a trophy that is so positive for any club and when you are in a process, obviously that makes it even more important, we have a great opportunity tomorrow, so let’s go for it.”

On his part, Chelsea boss Frank Lampard said it would be a delight to kick-off his career as Blues coach with a trophy.

“Yeah, obviously I would be delighted to win it. When you get to a final you want to win it. Simple as that. And at this stage in my career in my first year at Chelsea, of course, you’d want to win it, you would at any time but in an early start for me, I would do.

“It’s going to be difficult, it’s a difficult game in front of us, many a great manager over periods of time have not been able to win things, so I wouldn’t want to learn everything on it, but now we’re here in the final, of course, I want to win it.

“Predominantly for the club and for the players, for the work they’ve put in through the year.”

And when asked if he was surprised Arsenal beat City:” I wasn’t surprised that they won the game.

“Manchester City were most people’s favorites, they are pretty much in every game they go into almost.

“But I knew that with Arsenal and the individual and collective talent and the great coach that they have, who has really been positive for them in the short time he’s been there, that they had the capabilities to win a game like that.

“So it’s a game obviously I paid close attention to, but every game’s different, they’ve had other results recently and played in different formations.

“So we have to be ready for any eventuality but we also have to know that Arsenal will be a very tough match.”

Meanwhile, on the injury front, N’Golo Kante and Willian have been included in the squad, but Ruben Loftus-Cheek has a small problem he picked up on Thursday and is out of the game.

For Arsenal, Shkodran Mustafi has been ruled out with a hamstring injury which he picked up in the semi-final game against City.

Mason Mount rate himself seven out of 10 this season