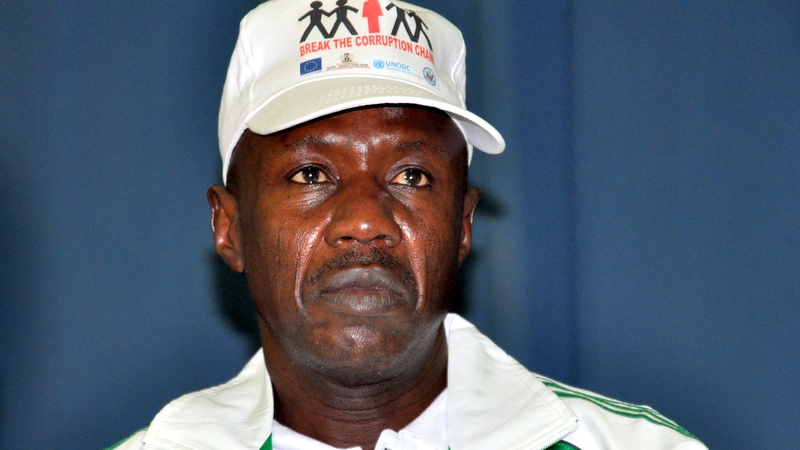 Lawal is currently standing trial before a Federal High Court in Lagos for allegedly receiving $25m out of the $153m loot traced to a former Minister of Petroleum Resources, Diezani Alison-Madueke. A source close to the panel said the former banker was invited as part of a probe into the investigative deficiencies of the EFCC under Magu.

During his appearance before the Justice Ayo Salami-led presidential panel on Saturday, Lawal was asked to testify without prejudice to his ongoing corruption trial. It was learnt that while the former banker was giving his testimony, Magu walked into the venue at the Banquet Hall of the Presidential Villa around 12pm, three hours before he was scheduled to appear.

A top source said, “Lawal appeared before the panel to clarify some allegations he had made in the past against the EFCC some of which had been reported to the Office of the Attorney-General of the Federation. This was without prejudice to his ongoing corruption trial.

“However, Magu strolled in around 12pm even though he was expected to arrive at 3pm. The panel members were initially reluctant to let Magu witness the hearing but he pleaded and was permitted to do so.”

Lawal, however, repeated the allegations he made against the EFCC in a counter-affidavit he filed before Justice Muslim Hassan of a Federal High Court in 2017.

The EFCC had frozen Lawal’s accounts and applied for the permanent forfeiture of his funds which the ex-banker challenged.

In a counter-affidavit he deposed to which formed the basis for his invitation by the panel, Lawal said the EFCC detained him for 11 days in 2016 and promised to release him only on the condition that he return some funds. On how he received the $25m, Lawal said he received a call from a friend, Stanley Lawson, March 2015 to help collect the money, which he subsequently paid into an account provided for him.

“I had no idea of the origin of the said funds and only acted in the course of normal banking business,” he said. The former banker said the EFCC allegedly compelled him to provide funds he never received.

Lawal said in the affidavit, “Having been invited and subsequently detained in Lagos for 11 consecutive days and without access to members of my immediate family, the EFCC investigators kept suggesting and insisting that there was a shortfall of $40m, which I had yet to account for.

“They were alleging that I had in fact taken $65m as opposed to the $25m, which I stated that I had received. The EFCC investigators interrogating me made it clear that the only way that I could/would leave detention is if I made their suggested shortfall available to them.

“Because I never had this EFCC invented $40m to give, I had to use my personal connections to source for and raise about 50 per cent of the said amount while I was in detention. I managed to borrow some of the money from the bank where I am an executive director and surrendered it to the EFCC through my legal counsel and was eventually released from detention on May 20, 2016.

“Consequently, in a three-week period between May 13 and June 6, 2016, I was made to surrender to the EFCC Recovery Account at the Central Bank of Nigeria the total sum of N9.08bn.”

Dauda Lawal, is a Nigerian Banker, who is known to be an established leader in the Nigerian Banking Industry. Lawal was known to be one of the key players in the financial sector of the Nigerian Economy for allegedly helping a former Minister of Petroleum Resources, Diezani Allison-Madueke, to conceal a total of $153.3million in Fidelity Bank in 2015.

Oshiomole prays dangerous prayers against Obaseki ahead of election