Despite Break Up In April, John Cena Reveals He Still Wants To Marry Nikki Bella
Advertisement

Crossdresser, Jay Bugatti sends out warning, wants to be referred to as 'she' 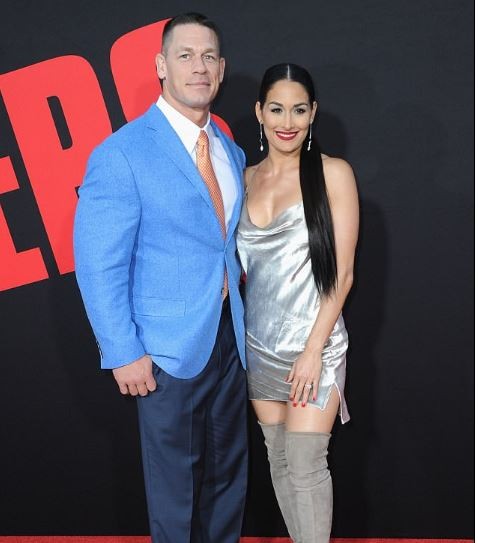 Wrestling superstars, John Cena, 41, and his fiancee Nikki Bella, 34, broke up their engagement in April just three weeks before their planned wedding. However, it would seem Cena is not yet over his ex because he has admitted he would love to marry and have children with her.

According to him, he wants to do all he can to make Nikki happy and for their relationship to ‘work’.

He added: ‘The point is for anyone out there speculating on what’s going on, I love her. I want to be with her. I want to make her my wife. I want to be the father of her children. I just want us to work and that’s so just from [the heart] and all that other stuff is B.S.’

‘There was an unfortunate set of circumstances where our relationship ended. There’s been a lot of speculation recently about me being seen in public, and everyone’s been like, ‘Oh John Cena’s enjoying the single life.’ No, I was supposed to be married and have a honeymoon over these two weeks.’

‘I am in my house alone surrounded by these emotionally strong memories. And everyday from 6 to 9 I get out of the house and talk to strangers as social interaction.

‘I don’t want anybody else. I love Nicole and I’m really trying to support her in her trying to find whatever it is she wants that made this fall apart in the first place.’

The sportsman also revealed that he was left ‘heart broken’ as he hinted that the break-up was down to Nikki.

He said: ‘It’s up and it’s down. I’ve always been honest with you guys, I also don’t want to ruin the viewers’ morning by giving them a bowl of sadness soup. It’s been up and it’s been down.

‘It’s been incredibly reflective, which is amazing, but it’s very difficult. I had my heart broken out of nowhere — well, for me it was out of nowhere.

‘And anyone who has experienced that knows that it comes with a series of bad feelings. But I’ve looked at myself every day and I’ve tried to evaluate myself and the woman that I love.’

‘I’m just trying to live life without her on a very emotional set of time.’

‘I have hope. I’m at a point in my life where I feel like I kind of lost me and I want to find me and work on me,’ she began.

‘I just want John and I both to live happily ever after whether it’s together or separate and I just don’t want us to go down the road in life and have regrets of like ‘I did this for you’ or ‘you did this for me,’ so I think it’s okay in relationships to take that moment.’

‘The day I say my vows, I want to say them once and I want to fully mean them, and so that’s what made me hesitant — am I ready to say these vows?’

‘When asked if her E! reality show ‘ Total Bellas’ with her twin sister put pressure on her situation, the star admitted saying: ‘I mean, it does put a lot of pressure,’ she began.

‘I think that was what I felt the first time in my life was just so much pressure from cameras, the world, my family, John, and I think, I started taking care of everyone and forgot about me and that’s what caused me, just I don’t know, I don’t want to say ‘snapped,’ I don’t want to say ‘a breakdown,’ but something like that, you know?’

This comes after it was claimed that the pair ‘still live together’ despite announcing their split last month.