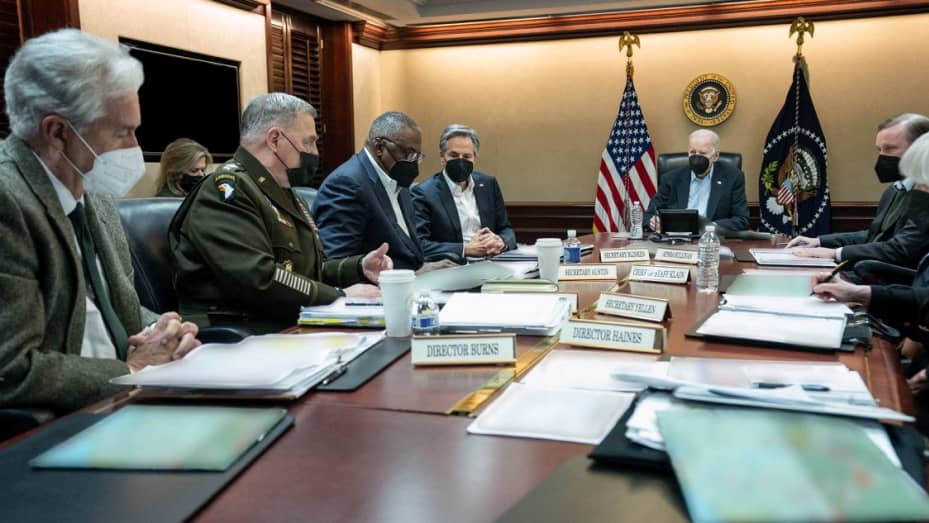 United States President Joe Biden has declared that the world will “hold Russia accountable” for the attack underway in Ukraine while setting out a set of sanctions against Russia.

Bideo who is set to address the nation at 12 p.m. ET, is also expected to unveil new measures that could cut off Russia from advanced technology, announce new restrictions on large financial institutions and slap sanctions on additional members of the inner circle of Russian President Vladimir Putin.

The planned sanctions, the latest US reprisals against Moscow this week, had been reserved as Biden hoped to maintain some leverage in dissuading Putin from a full-scale invasion. But so far, Western threats of economic punishment, as well as Biden’s strategy of revealing what the US knew about Putin’s buildup of forces to try to make the Russian leader second-guess himself, have proven ineffective.
After months of predictions and warnings, Russian forces began their attack on Ukraine Thursday morning local time, with reports of troops crossing the border to the north and south, explosions in multiple cities including the capital Kyiv, and warnings from Putin of future bloodshed unless Ukrainian forces lay down their arms.

Biden’s sanctions are now meant to punish Putin’s actions, rather than prevent them, by going after Russia’s economy, its military capabilities and those closest to the Russian President. How much they can alter Putin’s decision-making going forward, however, remains an open question.

Before he speaks, Biden is planning to confer with the leaders from the Group of 7 industrialized nations about which sanctions they plan to impose, hoping to coordinate a response that projects unity among Western allies. US and European officials spoke by phone overnight into Thursday to coordinate their responses.

On Thursday morning, EU Commission President Ursula von der Leyen promised to “weaken Russia’s economic base and its capacity to modernize” following the “barbaric attack” by Russia against Ukraine.

“We will freeze Russian assets in the European Union and stop the access of Russian banks to European financial markets,” she said.
Biden’s top national security aides convened emergency meetings late Wednesday as Putin announced his plan to launch a “military operation” against Ukraine in a televised address. The speech was aired in Russia at the same time the United Nations Security Council was convening to condemn Moscow’s behavior, catching some delegates off-guard.
Huddled in the West Wing, Biden’s national security adviser Jake Sullivan and other top officials prepared a statement from Biden condemning Russia’s attack as “unprovoked and unjustified.” “President Putin has chosen a premeditated war that will bring a catastrophic loss of life and human suffering,” Biden wrote in the statement, issued at 10:25 p.m. ET just as explosions began in Kyiv.
An hour later, Biden was on the phone with Ukrainian President Volodymyr Zelensky, who reached out to the White House as his country was coming under siege.
“He asked me to call on the leaders of the world to speak out clearly against President Putin’s flagrant aggression, and to stand with the people of Ukraine,” Biden said afterward in a statement. He said the US and its partners planned on “imposing severe sanctions on Russia.”
Biden announced a more limited package of sanctions on Monday following Putin’s initial decision to send troops into Ukraine following recognition of two pro-Russia regions in the Eastern part of the country. Those measures went after two state-owned financial institutions, three members of Putin’s inner circle and Russia’s sovereign debt.