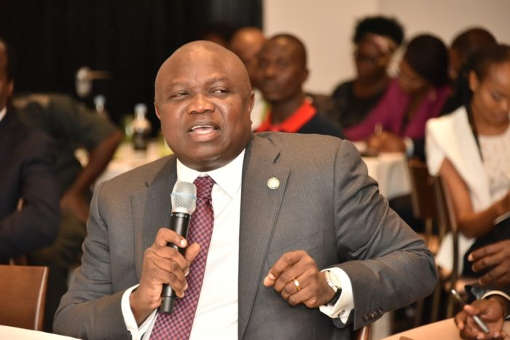 Gov. Akinwunmi Ambode of Lagos State, has extolled the contributions of religious groups towards the development of the State.

Ambode made the remarks at an inter-faith parley he held with religious leaders at Lagos House, Ikeja.

He described the spiritual leaders as great partners and pillars in the effort to bring greater progress and prosperity to the state.

The governor commended the religious leaders for their roles in sustaining and promoting peaceful coexistence and religious tolerance in Lagos.

This, he said, has greatly aided government’s efforts in the delivery of services and dividends of democracy to the people, especially those at the grassroots.

Ambode remarked that the gathering was a “thanksgiving’’ for the mercy and blessing of God, who created an atmosphere of harmony that is making it possible to bring greater gains to the people.

He also appreciated the spiritual leaders for their roles in building this state of peace in Lagos and “for fine-tuning strategies and harmonious relationship among Lagosians’’.

“I thank you all for your ceaseless prayers and for all the spiritual efforts through the power of the pulpits and for sensitising your followers to follow the path of civility and lawfulness.

“The commendations and awards the State Government received from the National Hajj Commission and the Christian Conscience Group are all testimonies to your efforts and conduct as understanding and tolerant believers,’’ Ambode said.

According to him, it would not have been possible for anybody to successfully deliver, in vast and complex megacity as Lagos, without special spiritual touch.

He thanked God for the inspiration and spiritual direction that has given him the bigger space to touch many lives and advance humanity.

Earlier, the Commissioner for Home Affairs, Dr AbdulHakeem Abdul-Lateef, praised the people of the state for choosing Ambode as the Governor of Lagos State.

“The clamour for a Christian governor during the electioneering period in 2015 was a justified request.

“I make bold to say that the governor did not disappoint the Christian and Muslim faithful, who vigorously requested for a Christian governor.

“Gov. Ambode has made both Christians and Muslims very proud,’’ the commissioner said.

Also speaking at the parley, Prof. AbdulLateef Adetona, the Head of Religious and Peace Studies, Lagos State University (LASU), recommended that the state government should encourage the teaching of religious studies in public schools.

Adetona said teaching religious studies would instil good morals in the minds of the children at their formative years.

He also called on leaders of religious groups to see themselves as partners in building a sustainable and enviable Lagos.

The don appreciated Gov. Ambode for decentralising activities of the Nigeria Inter-Religious Council (NIREC) to all the Local governments in the state.

“This is a right one in the right direction,’’ Adetona said.

Babarinde extolled the good efforts of the governor, describing his achievements as “life touching and very impactful to Lagosians’’

Related Topics:AmbodeLagosRELIGIOUS LEADERS
Up Next

PDP Leaders Urged To Focus On 2019