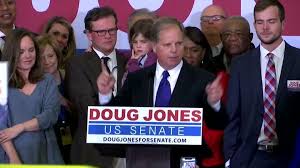 The Democratic victory in the most contentious US election of 2017, and in one of the reddest of deep South states, marks a bitter blow to the president, who gave his full endorsement to Republican Roy Moore after initial hesitations, despite the scandalous allegations against him.

With 94 percent of Alabama precincts reporting, Jones won 49.6 percent of the vote compared to Moore’s 48.7 percent, a margin of about 11,000 votes out of 1.1 million cast, according to figures posted by US networks including CNN.

Fox News and The New York Times also called the race for Jones.

“Thank you ALABAMA!!” Jones tweeted, shortly after his election party in Birmingham burst into celebratory cheers.

The loss by Moore, a former chief justice of the Alabama Supreme Court, shrinks the Republicans’ Senate majority to 51 in the 100-seat chamber, and reduces Trump’s margin for maneuver to the bare minimum.

By all accounts, it is a humiliating setback for Republicans in Washington as they struggle to pass Trump’s legislative agenda through Congress and make the case that they are the responsible stewards of government heading into the crucial 2018 mid-term elections.

“And if Democrats can win in Alabama, we can — and must — compete everywhere.”

The race was being seen as a harbinger of whether the Republican Party can retain its slim Senate majority next year.

It carries extraordinarily broad implications, and serves as a test of the partisan nature of American politics at a time of acrimonious debate about President Donald Trump and his policies.

The tumultuous election was buffeted for the past month with the shock allegations by several women — first reported by The Washington Post one month ago — that Moore assaulted, molested or pursued several teenage girls, including sexually touching one who was 14 years old at the time.

Related Topics:US SENATE RACE
Up Next