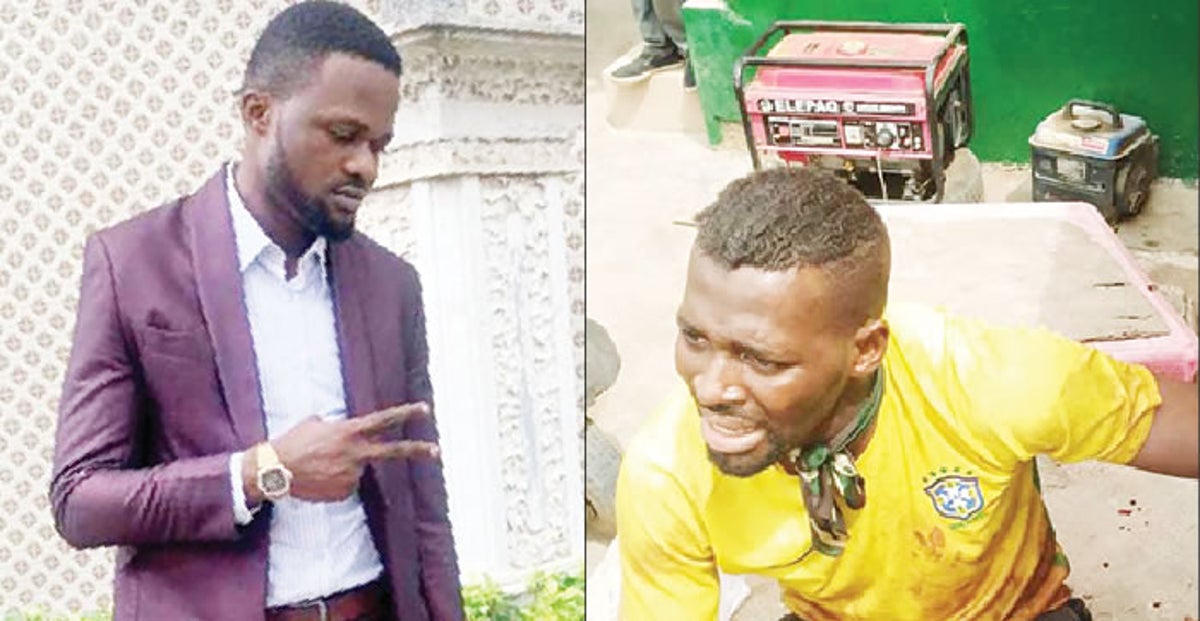 The incident happened on Sunday at No. 4 Sebil Kazeem Street in the Ikotun area of Lagos State. Temitayo was said to have been beaten to a pulp by a mob before the intervention of policemen from the Ikotun Police Station.

The remains of the victim were deposited in a morgue for autopsy. Trouble started when a resident of the house, one Banjo, demanded the payment of the electricity bill from the other occupants.

However, Temitayo was alleged to have refused to pay his share of the bill, which led to an argument between him and Banjo.

The suspect was said to have in a fit of anger taken a dagger with which he threatened to stab Banjo. It was gathered that Oladotun, who was coming into the compound with his brother and friend, saw Temitayo, who was searching for Banjo to stab him.

When Temitayo could not find his target, he reportedly directed his aggression at Oladotun and stabbed him in the chest.

She said, “The landlord does not stay in the house, so the person in charge of the electricity bill in the house went to the tenants on Sunday to tell them to settle the bill, but when he got to Temitayo’s apartment to ask for his share of the bill, an argument ensued between them and Temitayo threatened to break the man’s head.

“Banjo ran out of the compound and brought his brother, who is a soldier, and his colleagues and when they came, he was taken to the Ikotun Police Station to write an undertaken that he would not touch Banjo and others in the compound.

“When Temitayo got home, he started threatening to break Banjo’s head for daring to report him at the police station and when Banjo came back, other neighbours told him to run away and Temitayo started pursuing him in the compound.

“Oladotun and one of our brothers and his friend did not have a clue as to what was going on in the compound and they entered, because it did not cross my brother’s mind that he was going to stab him, because the disagreement was between Banjo and Temitayo.

“When Temitayo could not find Banjo, he stabbed my brother in the chest and my brother started shouting for help. When my other brother bent down to carry Oladotun, Temitayo attempted to stab him in the back, but for the intervention of their friend, who used his hand to block the assailant. My brother was rushed to hospital but he was pronounced dead on arrival.

“After the incident, people went after Temitayo and almost beat him to a pulp, but the police came to rescue him and took him away to the station. The IPO in charge of the case tried to change the narrative at the station by asking my dad if my brother had an underlying disease for him to have died from stabbing.

“We want justice; we don’t want them to release a criminal to start walking freely on the street, because if not for the DPO, the IPO would have released him as he was bringing up excuses for the suspect.”

The state Police Public Relations Officer, Bala Elkana, who confirmed the arrest of the suspect to our correspondent, stated that Temitayo was beaten by a mob and he needed to be fit for trial before he could be charged.

He said, “The report we got was that there was a misunderstanding between two neighbours and one stabbed the other and the suspect narrowly escaped mob action because of the timely intervention of the police.

“He is in our custody. The DPO reported the matter to the command headquarters, but the suspect was battered by the mob and we cannot detain him like that; so, he has to be treated under guard. He cannot stand trial the way he is. As soon as he is fit to stand trial, he will be in court.”